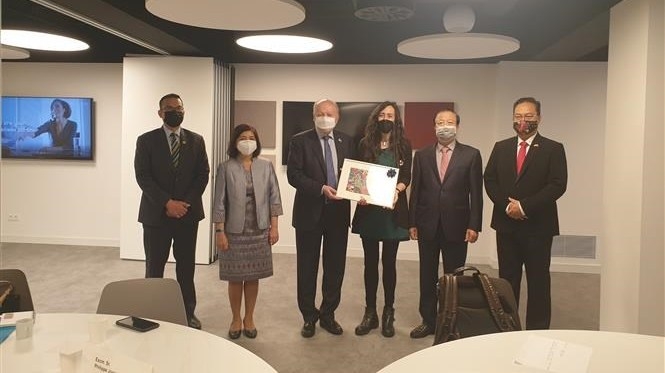 ASEAN diplomats and leaders of the Barcelona Chamber of Commerce and Industry (Photo: VNA)

NDO/VNA - Vietnamese Ambassador to Spain Hoang Xuan Hai led a delegation of the Embassy of Vietnam to join a host of activities in Barcelona city on June 5-8.

The ambassador attended a ceremony marking the 20th founding anniversary of Casa Asia, which was held under the Spanish Minister of Foreign Affairs chair and the Mayor of Barcelona.

Casa Asia, established in 2001, has hosted various exchange events between Spain and Asian nations, including Vietnam.

Hai and other ASEAN diplomats also joined a working session with the Barcelona Chamber of Commerce and Industry leaders.

He informed the delegates of Vietnam’s socio-economic development in the recent past and affirmed the Government’s aspiration to improve the business climate to attract foreign investors.

The ambassador believed that the EU-Vietnam Free Trade Agreement (EVFTA), which took effect in August 2020, and the EU-Vietnam Investment Protection Agreement (EVIPA), will offer new chances for businesses of Spain and Vietnam.
He hoped for close coordination and cooperation between the Vietnamese Embassy and the Spanish city’s Chamber of Commerce and Industry in organizing events to promote Vietnam’s economy, trade, investment, and tourism in Barcelona in the coming time.

The hosts spoke highly of Vietnam’s accomplishments, voicing a hope that the Vietnamese Government will further simplify administrative procedures and create a more optimal climate for investors.

Hai also attended a session with Vietnam’s Honorary Consul in Barcelona and overseas Vietnamese. He hoped that the Honorary Consul would serve as a bridge linking Vietnam and the Spanish city and supporting the Vietnamese community.

He also briefed the participants on the successful organization of the 13th National Congress of the Communist Party of Vietnam, the elections of deputies to the 15th National Assembly and all-level People’s Councils for the 2021-2026 tenure; along with socio-economic development in the first five months and achievements and efforts made in COVID-19 prevention and control.