Overseas Vietnamese all around the world have supported the homeland’s Covid-19 vaccine fund which was launched aiming to inoculate 70% of Vietnam’s population. 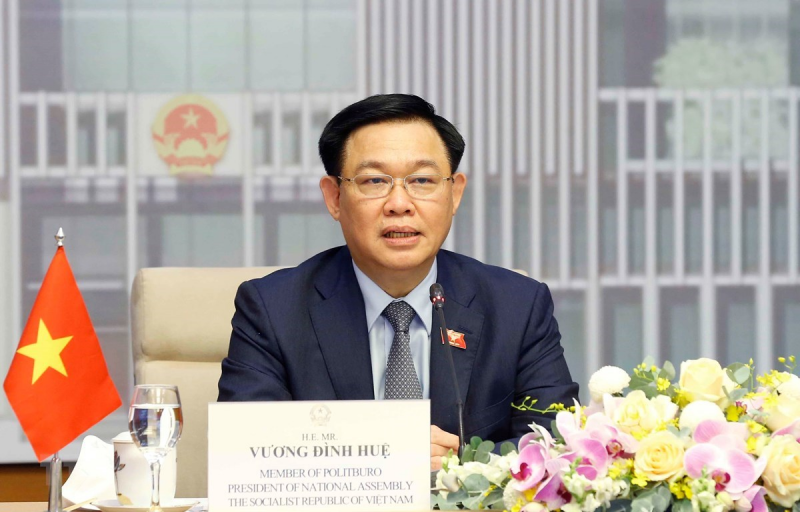 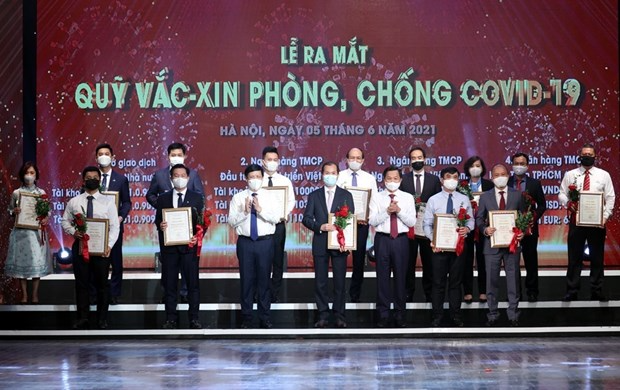 Vietnam News Today (June 7): Over US$ 56 mln donated to the Covid-19 Vaccine Fund 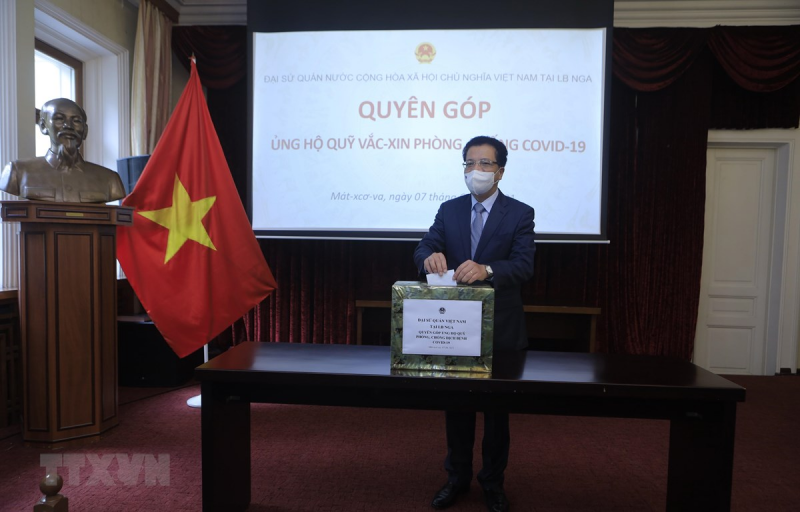 The Vietnamese Embassy in Russia on June 7 held a launching ceremony to support the Covid-19 vaccine fund in the homeland in response to the call President, Prime Minister and Vietnam Fatherland Front Central Committee and the Ministry of Foreign Affairs.

Speaking at the ceremony, Vietnamese Ambassador to Russia Dang Minh Khoi briefed participants on the Covid-19 situation in the home country, affirming that the country’s determination in preventing and stamping out the pandemic as well as boosting the economy, Vietnamplus reported.

He thanked Vietnamese agencies and community in Russia for always turning their hearts to the homeland, especially during the difficult time posed by the pandemic. 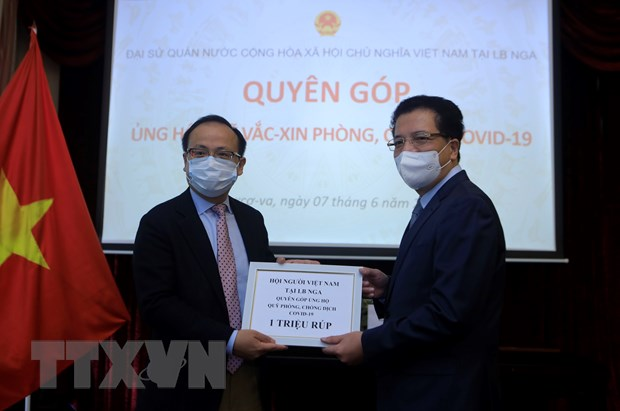 Ambassador Dang Minh Khoi receives the aid of US$ 13,750 from the Vietnamese Association in Russia. Photo: VNA

The diplomat expressed his belief that the fund would receive more donations in the time ahead.

On the first day of launching, all staff of the Embassy donated one day's salary. The Vietnamese Association in Russia contributed 1 million rubles (US$13,750), leaders and employees at Veliky Luki meat processing factory in Pskov province US$ 10,000.

Chairman of the Vietnamese Association in Russia Do Xuan Hoang said it would kick off another program with a website to call for donations within one month. The aid will be used to buy Russia's Sputnik V vaccine to gift the country.

On June 7, the Vietnamese Embassy in Switzerland also launched a program to raise fund for the homeland’s Covid-19 vaccine fund.

Addressing the event, Vietnamese Ambassador to Switzerland Le Linh Lan emphasized the country's positive results and difficulties in the fight against Covid-19 over the past time.

She said that the government’s top priority was protecting people's health, mobilizing all social resources to ensure mass vaccination, bringing life back to normal, and restoring the economy. 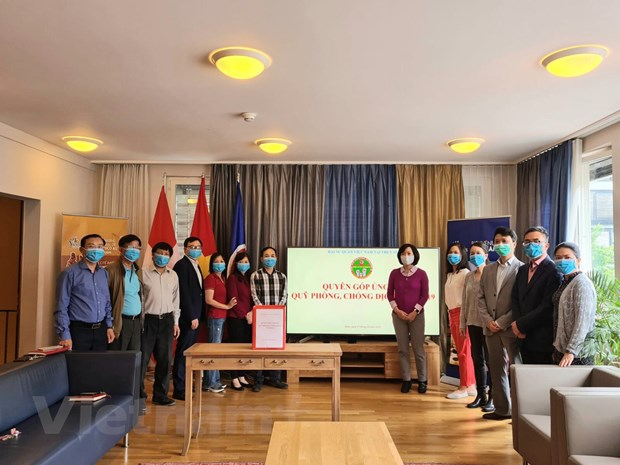 The Vietnamese Embassy in Switzerland on June 7 launched a program to raise fund for the homeland’s Covid-19 vaccine fund. Photo: VNA

She praised the sense of responsibility and solidarity of the Embassy's officers and employees and their families in contributing to the Covid-19 prevention and control work at home.

The ambassador required the Embassy staff to continue joining hands with overseas Vietnamese in Switzerland to fight against the pandemic.

The Vietnamese Embassy in Singapore has called on all of its officers and staff, ​​Vietnamese agencies, enterprises, organizations and expats in the country to assist the Covid-19 prevention and control work at home.

Speaking at the fundraising event, Charge d'Affaires of the Vietnamese Embassy in Singapore Le Cong Dung said that this was a practical and meaningful activity, showing their affection, attention and responsibility of overseas Vietnamese towards their home country during the pandemic.

The fundraising campaign has received an enthusiastic response from Vietnamese people in the host country. After three days of launching, the Embassy has raised more than SGD 150,000 (US$ 113,200).

The State Committee for Overseas Vietnamese Affairs under the Ministry of Foreign Affairs on June 7 held a ceremony to receive VND 100 million (US$ 4,360) from Dr. Phan Bich Thien, a Vietnamese Hungarian, to assist the country in preventing and controlling the pandemic.

At the ceremony, Deputy Minister of Foreign Affairs, Chairman of the State Committee for Overseas Vietnamese Affairs Pham Quang Hieu spoke highly of Thien's contributions to the country’s Covid-19 battle. 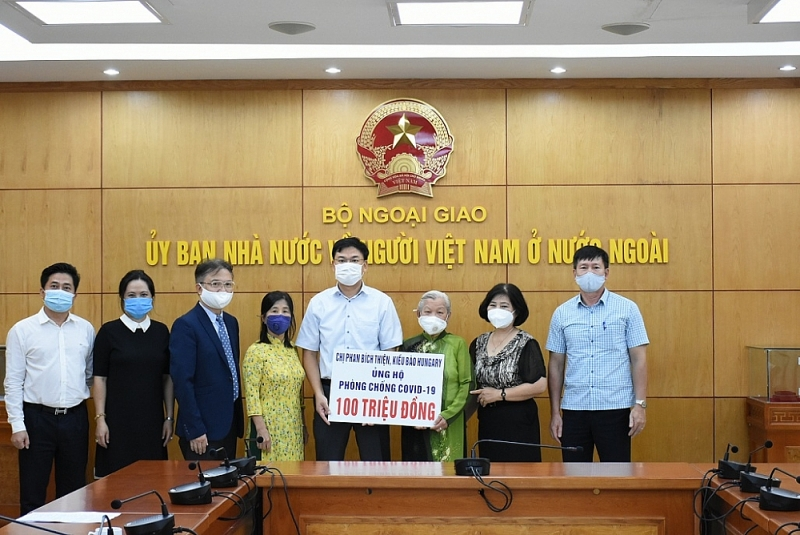 The deputy minister said since the start of Covid-19, overseas Vietnamese all around the world had donated cash and goods to the country, according to Baoquocte.

He added that the Covid-19 vaccine fund had received enthusiastic support from many Vietnamese expats.

The Vietnamese community in Laos have also appealed to each other to aid the Covid-19 vaccine fund at home.

Tran Van Nang, a Vietnamese Lao in Vientiane said he got updated on the Covid-19 situation in Vietnam every day, adding that he felt proud of the country’s successes in Covid-19 prevention and control during the past two years.

Nang added that although Vietnam has grappled with the most severe coronavirus wave, with the strong determination of the entire political system and citizens, Vietnam would soon win over the pandemic.

He said that the establishment of the Covid-19 vaccine was a wise decision that would help the country to soon inoculate the entire residents, contributing to developing the economy.

Ngo Thi Kieu, a nurse at the Hanoi-Vientiane Hospital, said she also hoped Vietnam would soon stamp out the pandemic. Thus, as soon as hearing the country’s Covid-19 vaccine fund, she sent texts to support it.

Kieu stressed that in the latest Covid-19 wave, the government had adopted various new pandemic prevention measures, in accordance with the actual situation.

Representatives of international organizations in Vietnam have spoken highly of the solidarity and sense of responsibility amongst the people in the Covid-19 fight through the vaccine fund initiative.

The fund was officially inaugurated on June 5, with an aim to mobilize social resources so as to facilitate the purchase and importation of vaccines as well as the research and production of homegrown ones. 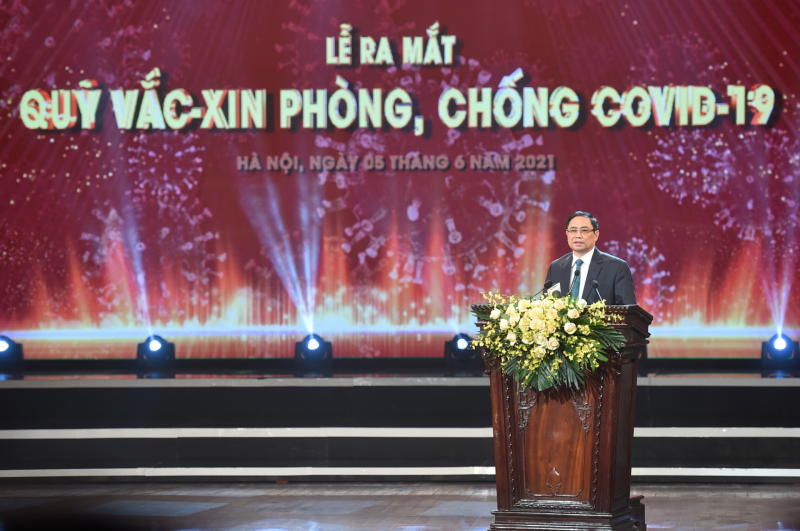 Dr Kidong Park, WHO Representative in Vietnam, said the mobilization to improve access to Covid-19 vaccine of the Vietnamese Government is carried out in a timely manner and in line with the global vaccine initiative.

That the Government manages and equitably uses donations from individuals and private firms is hoped to result in new values for the strategy to fight the ravaging pandemic, he added.

UN Resident Coordinator in Vietnam Kamal Malhotra affirmed that the initiative has received support from the UN over the months.

He noted that there should only be one fund at the national level, under the supervision and guidance of the Government. 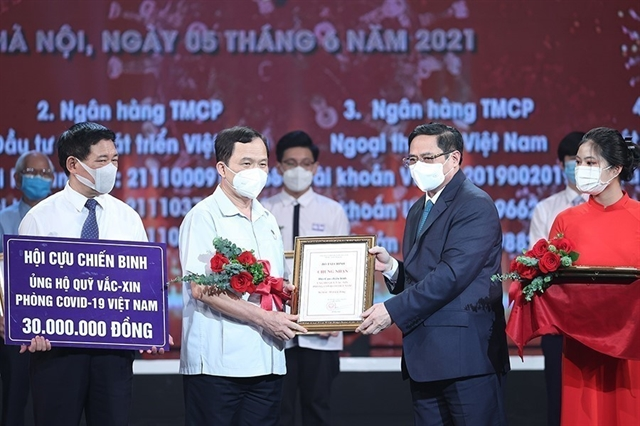 Welcoming the inauguration of the vaccine fund, Carolyn Turk, World Bank Country Director for Vietnam, said that the Vietnamese Government has made an accurate move in speeding up the inoculation drive.

For her part, UNDP Resident Representative in Vietnam Caitlin Wiesen said a UNDP study showed that people in the country are highly in favor of Covid-19 prevention and control measures of the Government.

Therefore, she expressed her belief that people from all walks of life, especially businesses will respond to the Government’s call and make contributions to the newly-established fund.

Ambassador Giorgio Aliberti, head of the European Union Delegation to Vietnam, said the establishment of the vaccine fund has a significant role to play in Vietnam’s strategy in battling Covid-19.

He also said he believes that the Vietnamese Government plays a core role in the mobilization and connection of resources.

Prime Minister Pham Minh Chinh said the fund aims to help Vietnam cope with the pandemic in the long run as people need to be vaccinated every year.

The fund will be used for buying Covid-19 vaccines from abroad and for supporting the production of made-in-Vietnam vaccines towards fulfilling the target of inoculating 70 percent of Vietnam’s 98-million population.

Minister of Finance Ho Duc Phoc said Vietnam aims to secure 150 million doses of vaccines to immunize 75 million of its population this year, and the cost is estimated at VND 25.2 trillion, VnExpress reported.

The government is expected to provide VND 16 trillion and localities nationwide as well as private sources will make up the rest.

Vietnam began a Covid-19 vaccination program on March 8 using the British-Swedish AstraZeneca vaccine that was procured through commercial contracts and via the Covax facility.

So far, over 1.2 million people have been vaccinated, mainly frontline workers in the Covid-19 fight, including medics at local hospitals. Of these, more than 33,000 have received the prescribed two doses. 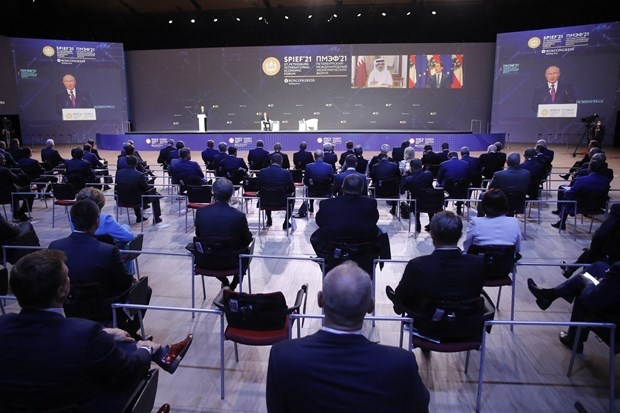 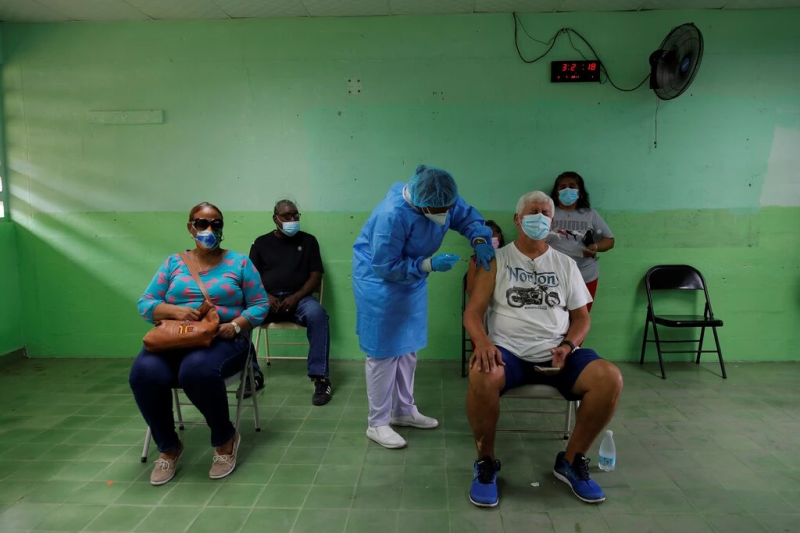 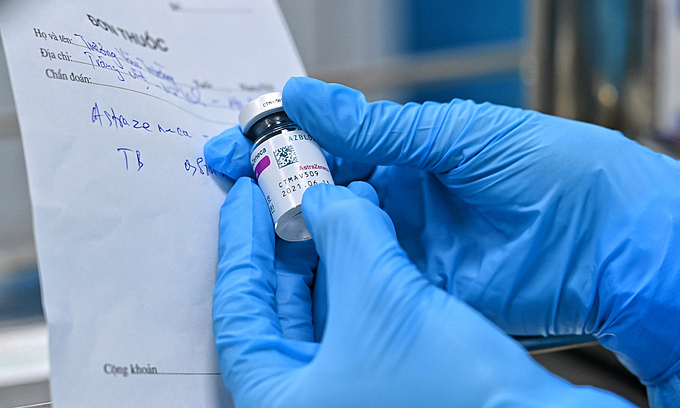 Today, 16:30
The 6th edition of the Digital Brunch, Under the theme: Gaming, Esports & Marketing in Middle East and Africa