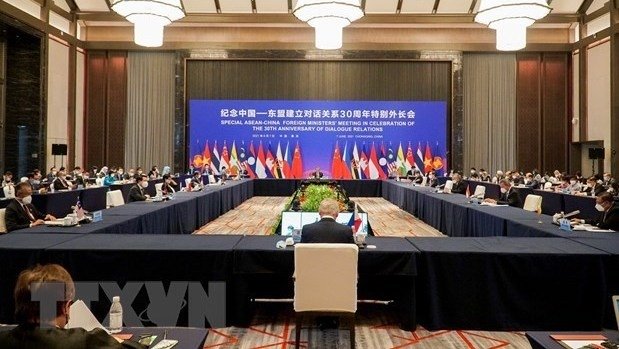 This is the first in-person meeting at the foreign ministerial level held by ASEAN since the COVID-19 outbreak.

During the meeting, ASEAN Foreign Ministers and Chinese State Councilor and Foreign Minister Wang Yi reaffirmed the high commitment of both sides to attaching importance to and making joint efforts to promote the growing strategic partnership between ASEAN and China, on the basis of mutual benefits, respect and understanding, thus contributing to peace, stability and prosperous development in the region and the world.

They acknowledged that through active exchanges and meetings at all levels and effective coordination at regional dialogues and cooperation mechanisms led by ASEAN, political trust is consolidated and neighbourhood relations are nurtured. Economic cooperation has witnessed very dynamic developments. Two-way trade has increased by 80 times in the past three decades, making China and ASEAN the biggest trading partner of each other.

ASEAN Foreign Ministers considered the ASEAN-China partnership as one of the bloc's most dynamic, substantive and effective relations, and appreciated China's timely and effective cooperation in difficult and challenging times, especially in response to the COVID-19 pandemic.

For China, Chinese State Councillor and Foreign Minister Wang Yi stressed that ASEAN has always been a high priority in China's foreign policy. China consistently attaches importance to the friendly neighborliness and win-win cooperation with ASEAN, and wishes to lift the bilateral strategic partnership to a new height, he said, adding that his country also supports ASEAN's central role in the regional architecture.

The Foreign Ministers of ASEAN and China shared many important development orientations for the bilateral relationship, in which they agreed to give high priority to promoting cooperation in controlling COVID-19 and promoting post-pandemic recovery.

The Chinese side affirmed that it will continue to speed up the supply of COVID-19 vaccines to ASEAN countries, and support the grouping to improve its vaccine research, development, production and distribution capacity. China will also actively cooperate with ASEAN to boost recovery through the implementation of the ASEAN Overall Recovery Framework, facilitate trade and investment, effectively utilise the ASEAN-China Free Trade Agreement (ACFTA), and soon put the Regional Comprehensive Economic Partnership (RCEP) Agreement into effect. The two sides will continue to expand cooperation for sustainable development in the spirit of their cooperation theme in 2021.

ASEAN and China agreed to closely coordinate in implementing activities to mark 30 years of the bilateral partnership between the two sides, as well as preparing best results for the ASEAN-China commemorative summit later this year.

On regional and international issues of shared concern, the conference affirmed that the maintenance of an environment of peace, security and stability in the region, including in the East Sea/South China Sea, is the common interest and benefit of ASEAN and China. The ministers welcomed the 19th ASEAN-China Senior Official Meeting (SOM) on implementing the Declaration on the Conducts of Parties in the East Sea (DOC) which took place ahead of the ministerial meeting.

They pledged to continue fully and effectively implement the DOC, resume negotiations on building a Code of Conduct in the East Sea (COC) in line with international law and the 1982 UN Convention of the Law of the Sea (1982 UNCLOS).

On the Myanmar situation, China welcomed the outcome of the ASEAN leaders’ meeting on April 24, supporting the role of ASEAN in promoting dialogue and mediation and helping Myanmar seek a solution to stabilise the situation. 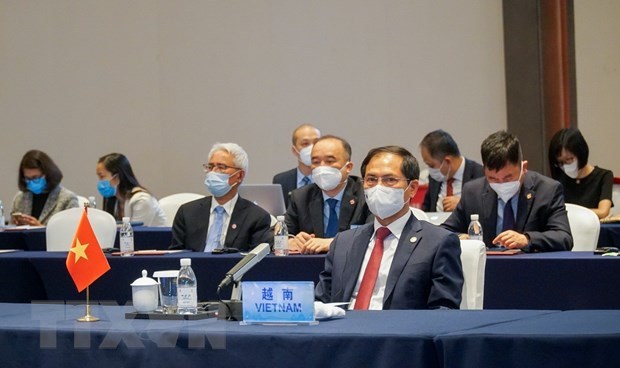 Speaking at the event, Vietnamese Foreign Minister Bui Thanh Son affirmed that the achievements obtained over the past 30 years have proved the sustainable, reliable and mutually beneficial partnership between ASEAN and China. He stressed that Vietnam will actively work with ASEAN member countries and China to strengthen political dialogue; improve mutual understanding, trust and respect; and promote comprehensive cooperation, making the bilateral relationship a model of stable and sustainable partnership between neighbouring countries.

Regarding the world and regional situation, the Vietnamese minister emphasised the importance of efforts by ASEAN and China to maintain an environment of peace, security, stability and rule of law in the region, through responsible acts, cooperation with goodwill, self-restraint, and peaceful settlement of disputes and differences. He affirmed that Vietnam will continue to work with ASEAN countries and China to fully and effectively implement the DOC and build an effective and efficient COC in accordance with international law and the UNCLOS 1982.

According to Son, as members of the ASEAN Community, ASEAN countries will continue to support Myanmar to find a long-term solution to stabilise the situation, ensure safety, and normalise people's lives. He said he hopes that China would actively back this effort of ASEAN.