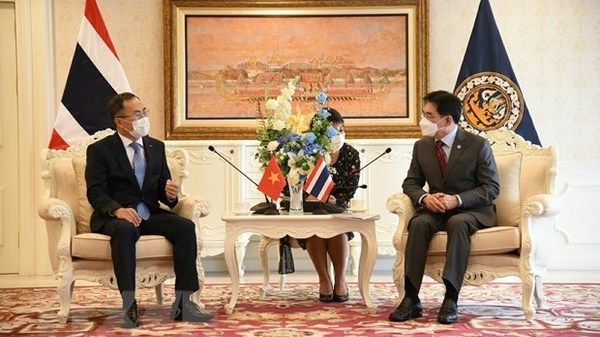 NDO/VNA – Thai Deputy Prime Minister and Minister of Commerce Jurin Laksanawisit has affirmed that economic, trade and investment cooperation between Thailand and Vietnam is flourishing with bilateral trade in the first four months of 2021 increasing by 20 percent year-on-year despite the COVID-19 pandemic.

Jurin made the statement at a reception on June 7 for newly-appointed Vietnamese Ambassador to Thailand Phan Chi Thanh, during which the Thai Deputy PM affirmed his desire to further expand the bilateral relations.

He highly valued the traditional friendship and strategic partnership between the two countries. Vietnam and Thailand are celebrating the 45th anniversary of diplomatic ties in this year.

He suggested the two sides closely coordinate to resolve technical issues relating to import and export between the two countries, towards lifting the two-way trade to US$25 billion by 2025.

For his part, Ambassador Thanh affirmed that he will coordinate with Thai agencies to further promote the Vietnam - Thailand Strategic Partnership.

He highlighted fruitful development of the relations between the two sides in all fields, especially in trade and investment, saying that Thai investors have trusted to choose Vietnam as a long-term investment destination.

Thanh affirmed that the Vietnamese Embassy in Thailand will work closely with ministries and sectors of both sides to create favourable conditions for Thai investors to do business in Vietnam.