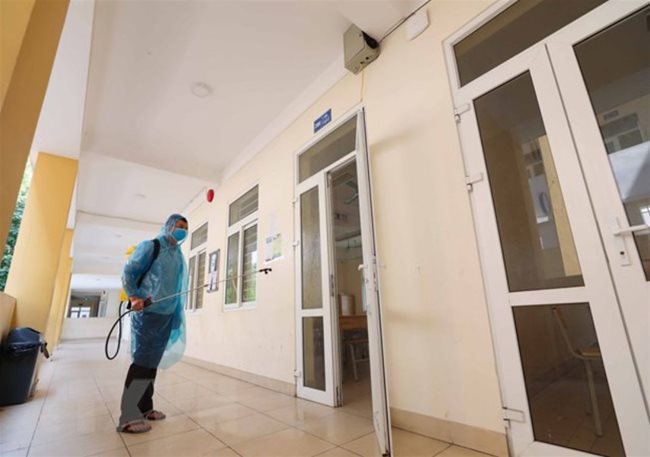 A health worker sprays disinfectant to prevent the spread of Covid-19. The Ministry of Health this afternoon, June 7, reported 92 new locally-infected Covid-19 cases in five provinces and cities - PHOTO: VNA

Most of the latest domestic cases were found at quarantine facilities or in areas on lockdown. HCMC had 14 more cases, while Lang Son Province reported seven, Ha Tinh Province saw two and Hanoi City confirmed one.

The number of domestic cases in the current fourth wave of coronavirus had reached 5,757 as of this afternoon.

In related news, after a man re-tested positive for the disease, on June 5, the authorities in Thanh Hoa Province locked down 57 households with 208 people in Hoang Hoa District’s But Son Town for 28 days.

The 24-year-old returned to Vietnam through Danang International Airport from Japan on April 2 and was quarantined in Quang Nam Province. He tested positive for the virus on April 8. After receiving treatment at the Quang Nam General Hospital, he tested negative for Covid-19 three times and was discharged from the hospital.

On June 4, his sample was taken by the Hoang Hoa Healthcare Center for testing and the result came out positive.

In another development, speaking at a meeting with the Danang steering committee for Covid-19 infection prevention and control on June 6, Danang Vice Chairman Le Quang Nam said that the city underwent 19 consecutive days without community transmission.

As the disease is still raging in other provinces and cities, the Danang City departments and districts were told to continue drastic anti-virus measures.

The vice chairman also tasked the competent forces and border guards with tightening control over entry at checkpoints to prevent community spread, the local media reported.

The Danang Department of Health was told to work with the city’s police and other relevant agencies to monitor the people arriving in the city from Bac Giang, Bac Ninh, HCMC and Hanoi since May 20 and conduct testing.

The department was assigned to work out a plan to test public employees, teachers, students and staff who will serve the upcoming 10th grade entrance examination.