Chairman of the Vietnamese National Assembly (NA) Vuong Dinh Hue thanked the Cambodian NA, Government and relevant agencies for supporting the Vietnamese community living, studying and working in Cambodia in the fight against the Covid-19 pandemic while talking with his Cambodian counterpart Samdech Heng Samrin on Thursday morning.

During the online talks on Thursday, Hue reiterated Vietnam’s consistent policy of attaching importance to and giving a high priority to strengthening its traditional friendship with Cambodia as well as its support for the Cambodian People’s Party (CPP)’s leadership in building a peaceful, independent and neutral Cambodia.

He said he wanted to closely co-operate with President of the Cambodian National Assembly Samdech Heng Samrin, Prime Minister Hun Sen and other Cambodian leaders “to further promote and intensify the good neighbourliness, traditional friendship, comprehensive cooperation and long-lasting sustainability between the two countries and legislatures”.

According to the NA Chairman, Vietnam industrial production expanded nearly 10 percent compared to the same period last year. FDI inflows exceeded US$14 billion. Total retail sales of goods and services rose by 8 per cent. Export revenues reached more than $130 billion, up nearly 31 percent year-on-year, while imports surged 36.4 percent. CPI rose 1.29 per cent, the lowest since 2016. Vietnam is striving to achieve GDP growth of around 6 percent this year.

Hue told his Cambodian counterpart that Viet Nam has been making all-out efforts to accomplish the dual goal of containing the Covid-19 pandemic and sustaining positive economic growth, adding that the country managed to post a growth rate of 2.91 percent last year.

Though the Covid-19 situation remained complex, the nation’s economy performed well in the first five months of 2021, Hue said. 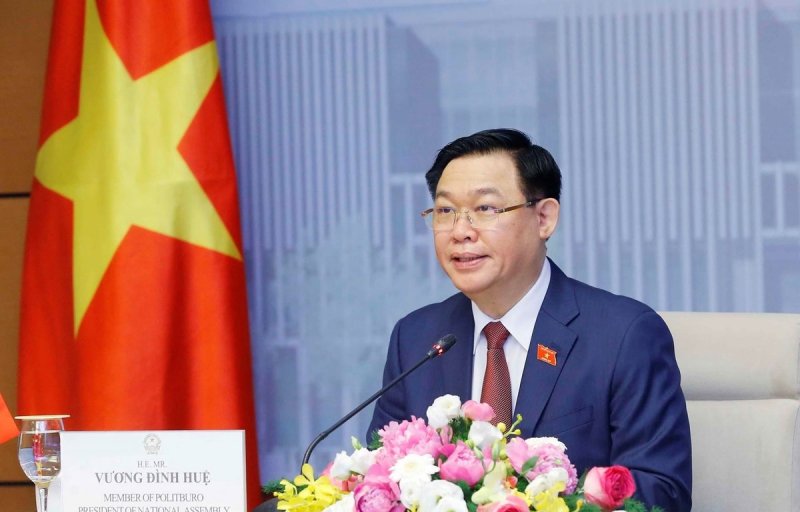 Two-way trade between Vietnam and Cambodia reached $3.9 billion in the first four months of 2021, a year-on-year increase of 122 percent, making contribution to economic recovery and local livelihoods improvement of both countries. Both sides showed their delight at the growth of the bilateral ties as top leaders of the two countries have maintained regular meetings and exchanges amid the pandemic, while bilateral cooperation mechanisms continued to be effectively upheld.

The two leaders appreciated the two countries’ ratification of documents marking the completion of 84 percent of land border demarcation and marker planting workload, and expressed their hope that the remaining work will be completed to build a borderline of peace, friendship, cooperation and development, for peace and prosperity of the two nations’ people.

Hue also expressed his support for Cambodia’s policy on regional and international integration and multilateralisation and diversification of foreign relations, thus contributing to peace, stability and development in the region and the world as a whole.

Heng Samrin welcomed the two governments’ joint determination to consolidate cooperation and support each other in ensuring security and preventing cross-border crimes such as human trafficking, smuggling of drugs, forestry products, wild animals and explosives, as well as in stepping up socio-economic development in border areas, and in combating Covid-19.

He spoke highly of Vietnam’s efforts to well control the spread of the Covid-19 pandemic, while thanking Vietnam’s assistance to Cambodia’s fight through the provision of medical supplies and equipment. 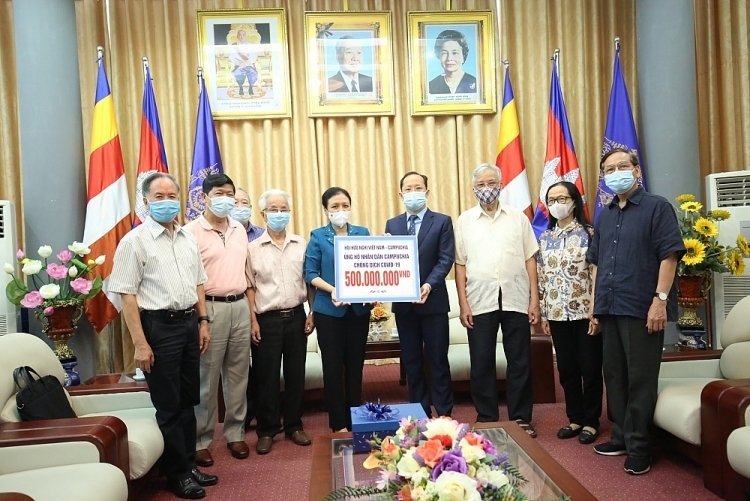 In mid-May, the Vietnam Union of Friendship Organizations and the Vietnam-Cambodia Friendship Association present an aid package of over$ 20,000 to support Cambodia in its fight against Covid-19. Photo VUFO

Hue affirmed that Viet Nam will back and share experience with Cambodia to successfully organize international conferences in 2021 and support Cambodia’s elections of deputies to the 5th-tenure commune-ward councils in 2022 and to the 7th-tenure National Assembly in 2023.

He suggested both sides actively exchange information, co-ordinate closely and support each other in regional and global issues, including activities at multilateral forums and ASEAN cooperation framework and ASEAN-led mechanisms, and within the frameworks of the United Nations, the World Trade Organisation, the Asia-Europe Meeting (ASEM), Mekong sub-regional cooperation mechanisms, and the Cambodia-Laos-Vietnam tripartite cooperation.

The Vietnamese leader vowed to co-ordinate with his Cambodian counterpart in implementing the cooperation agreement between the two legislatures, signed in May 2019.

The two leaders highlighted the need to encourage and supervise ministries, sectors, localities and businesses to carry out signed agreements so as to deepen the Vietnam-Cambodia comprehensive cooperation.

They agreed to work together to hold activities and events to celebrate the 55th founding anniversary of bilateral diplomatic ties in 2022 (June 24, 1967-2022)./.