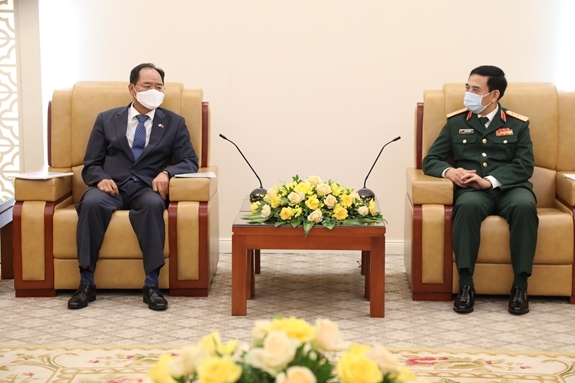 Receiving Ambassador Verma, Giang expressed his belief that with the Government’s active measures and support of the army, the Indian people will soon overcome this difficult time.

He affirmed that Vietnam attaches importance to the development of comprehensive and substantial partnership with India, considering it one of the important factors to help the country succeed in national development for the sake of peace, stability and prosperity in the region and the world.

Verma, for his part, believed that in his new position, Giang will make practical contributions to developing ties between the two nations, and between their armies in particular. 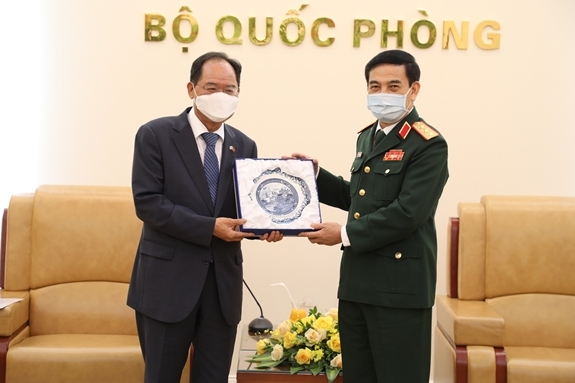 They pledged to soon sign the Joint Vision Statement on Defence Cooperation between Vietnam and India during the 2021-2025 period.

In a conversation with Ambassador Park, Giang thanked the RoK Government for providing Vietnam with an aid worth US$500,000 for the fight against COVID-19.

He hailed RoK individuals and organisations for offering donations to Vietnam as well as the Republic of Korea’s sharing of experience and support for countries in difficulties amid the pandemic.

The host took note of new developments in bilateral defence ties since the signing of the Joint Vision Statement on Defence Cooperation through 2030, with the formation of new cooperation mechanisms such as the annual deputy ministerial-level defence policy dialogue, personnel training, cyber security and overcoming the consequences of after-war bombs and mines.

Park believed that Giang will make further practical and effective contributions to lifting bilateral ties as well as relations between the two armies in a sustainable manner.

The meeting was held to discuss working arrangements with Vietnamese workers in Korea and vice versa, according to the Molisa government website.

Ambassador Park said that there were currently many Vietnamese employees coming to Korea to work under a term contract, with many South Korean citizens also heading to Vietnam to work. 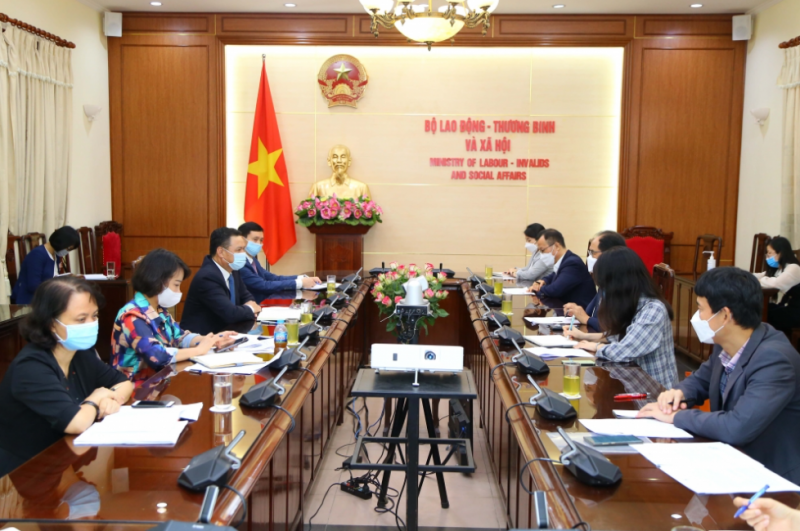 Overview of the meeting on May 12

The ambassador said he hoped that the Ministry of Labour, Invalids and Social Affairs would have specific directions and instructions on sending Vietnamese workers to seasonal jobs in Korea, and consider signing the Vietnam-South Korea Agreement on Working Holidays to contribute to cultural exchange and building a sustainable foundation between Vietnam and South Korea.

On the 30th anniversary of diplomatic relations establishment between Vietnam and Korea, the ambassador said he wished that in the near future the two countries would carry out practical activities such as signing the MOU extension on labor and employment cooperation between South Korea and Vietnam or signing an agreement on social insurance.

At the meeting, Deputy Minister Le Van Thanh said that Korea was one of Vietnam's closest partners. Diplomatic activities between the two countries have seen achievements in many areas, such as politics, economy, culture and society.