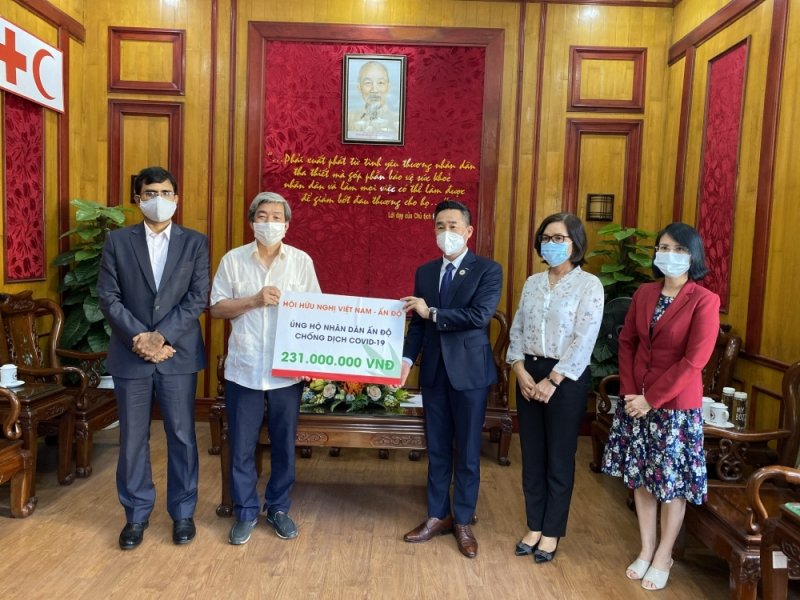 On May 27, in Hanoi, the Vietnam - India Friendship Association under the Vietnam Union of Friendship Organizations presented 231 million VND (over 10,000 U.S. dollars) to the Vietnam Red Cross Society to support India through its deadly Covid-19 surge.

Speaking at the ceremony, Ha Minh Hue, permanent vice president of the friendship association, said that in the face of the complicated development of the Covid-19 in India, the Vietnam - India Friendship Association on May 6 has launched a fund-raising campaign to support and join hands with the Indian people to prevent this pandemic.

Responding to the call, members of associations and its chapters in Hanoi, Da Nang, Phu Yen, Binh Duong, Can Tho, and Ho Chi Minh City were participated enthusiastically. In particular, some Vietnamese individuals who love India, upon hearing the news, voluntarily contributed and personally went to the association's headquarters to deliver the donation.

'There is a nearly 80-year-old-woman with no monthly pension, still try to collect and save a sum of 3 million VND (130 U.S. dollars) and personally bring it to the association's headquarters," Hue shared.

As of May 26, the Vietnam - India Friendship Association has raised an amount of 231 million VND. On behalf of the friendship association, on May 27, Hue has presented the above-mentioned donation to the Indian people through the Vietnam Red Cross Society.

Although the amount is not large, it shows the solidarity of the Vietnamese with Indian people in this difficult time, Hue stressed.

First Secretary of the Indian Embassy in Vietnam Sushil Prasad thanked the good deeds of the Vietnam - India Friendship Association, the Vietnam Red Cross Society as well as the Vietnamese people, saying this is the timely concern and sharing, demonstrating the friendly cooperation and good tradition between India and Vietnam in the fight against the pandemic.

Previously, the friendship association had donated 100 ventilators worth more than 10 billion VND (432,500 U.S. dollars) funded by Vingroup to the people of India.

According to Prasad, the first batch of the gift arrived at Indira Gandhi International Airport in New Delhi on May 21 and was delivered by the Indian Red Cross to health facilities across India. In addition, other shipments transported by ships are expected to arrive in India in early June. 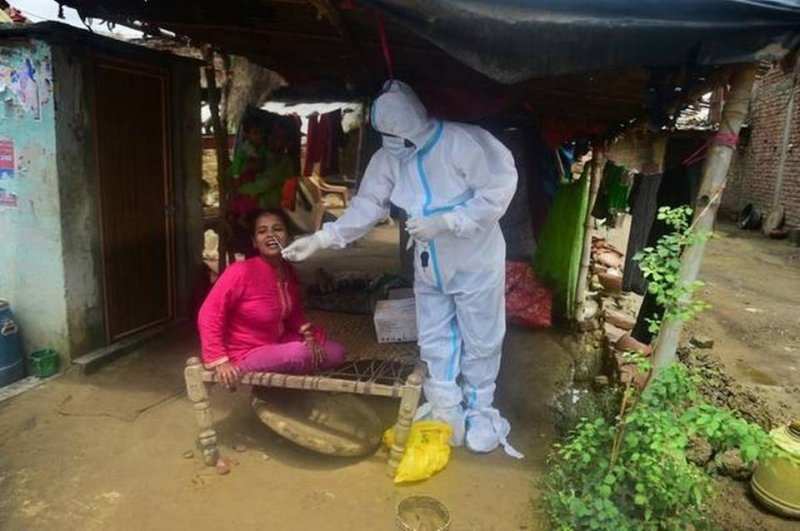 A health worker takes a swab sample from a woman to test for COVID-19 on the outskirts of Prayagraj on May 28, 2021. Photo Credit: AFP

In April 2020, the Vietnam - India Friendship Association had called on businesses in the information and communications sector to donate 100,000 antibacterial cloth masks to the Indian people.

India’s average daily test positivity rate (positive cases identified for every 100 tests) continues to decline. It was 10.4% on May 27 compared to 15.4% recorded a week before.