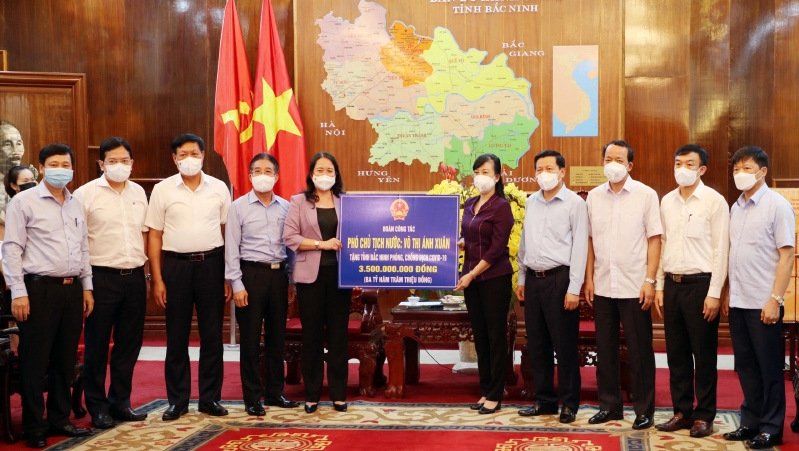 NDO/VNA - Vice President Vo Thi Anh Xuan on May 28 visited and inspected COVID-19 prevention and control in the northern provinces of Bac Ninh and Bac Giang, which have borne the brunt of the current wave of outbreaks.

At her separate meetings with authorities of the localities, the official shared difficulties the two provinces are facing in the fight against COVID-19 and lauded their efforts to combat the epidemic and successfully organise the recent elections of deputies to the 15th National Assembly and People’s Councils at all level for the 2021-2026 tenure.

She recommended them to press ahead with pandemic prevention and control as well as sustaining socio-economic development.

On the occasion, the Vice President presented VND3.5 billion (US$151,000) to each of the two provinces in support of their fights against the pandemic.

As heard at the meetings, hit by a new strain with a high infection rate, Bac Ninh, home to a high population density and ten operating industrial parks (IPs) with more than 400,000 workers, is facing lots of challenges in repelling the epidemic.

The province has so far logged over 700 COVID-19 infections, including over 100 cases at local IPs. It has so far received 150,000 doses of COVID-19 vaccines to inject frontline forces and workers.

Secretary of the provincial Party Committee Dao Hong Lan said the number of doses till fall short of demand and hoped a larger number of vaccines will come for mass vaccination.

Meanwhile, Secretary of the Bac Giang provincial Party Committee Duong Van Thai reported that the province has so far locked down six districts and stopped the operation of four IPs. Currently, more than 60,000 workers from 61 provinces and cities live in residential areas around the local IPs. Bac Giang has promptly blocked these areas, preventing workers from returning to their hometowns to avoid spreading the disease throughout the country.