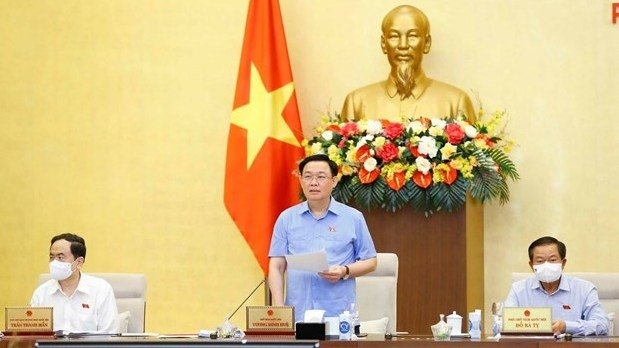 NDO/VNA - National Assembly Chairman Vuong Dinh Hue has said voter turnout in the elections of deputies to the 15th NA and People’s Councils at all levels for the 2021-2026 tenure reached 99.57%, higher than the figure of over 98% in the previous tenure.

In his speech at the closing of the 56th meeting of the NA Standing Committee in Hanoi on May 27, Hue said the committee basically agreed with the preliminary report by the National Election Council on the outcomes of the elections.

According to the report, the elections were held in a democratic and safe manner in line with the law though the COVID-19 pandemic is affecting 30 cities and provinces nationwide, with Bac Giang, Bac Ninh, Hanoi, Ho Chi Minh City, Da Nang and Vinh Phuc being hardest hit.

The lowest turnout in several localities also reached more than 98%, according to the report.

Hue expressed his delight that voters elected enough 500 lawmakers and basically enough deputies to People’s Councils at the communal, district and provincial levels.

The NA Chairman asked the National Election Council to instruct provinces and cities to submit official reports on the elections to the council in order to complete a final report and make preparations for the 15th NA’s first session and the first meetings of the People’s Councils at all levels.

Also at the closing, the top legislator lauded the State Audit Office of Vietnam’s report, which he said, will lay a ground for the NA Standing Committee and the NA to adopt the State budget balance in 2019 and relevant reports.

According to the Chairman, the NA Standing Committee also highly evaluated examination reports by the NA Finance-Budget Committee.

On the basis of opinions at the meeting, Hue ordered relevant agencies to complete the 2020 State budget balance, State finance, and thrift practice and wastefulness prevention reports.