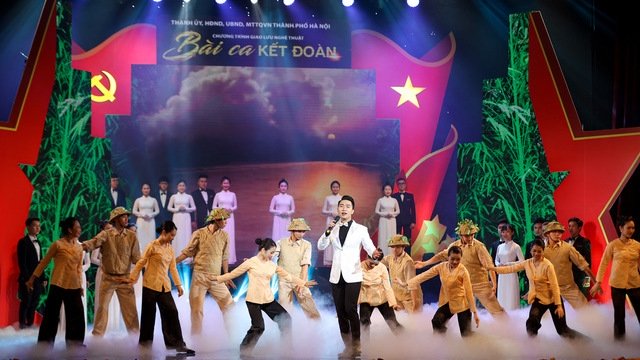 A performance at the programme (Photo: toquoc.vn)

NDO – An art programme entitled ‘A Song of Unity’ was held at the Hanoi Opera House on May 24 to celebrate the success of the election of deputies to the 15th National Assembly and People’s Councils at all levels for the 2021-2026 tenure.

Hosted by Hanoi Radio and Television (HTV), the event was held with no live audience due to the complicated developments of the COVID-19 pandemic. It was broadcast live on HTV’s Channels 1 and 2.

Through music, reporting, and documentaries, the programme recalled the glorious history of the Vietnamese National Assembly as well as the country’s historical milestones and achievements since the National Assembly’s first general election on January 6, 1946.

Performances were staged by popular singers and artists including People’s Artist Thai Bao, Trong Tan, Le Anh Dung, and To Hoa, and the Duo and Thang Long dancing troupes.