A woman in HCMC casts her vote at a polling station in Tan Binh District - PHOTOS: LE VU

HCMC - Citizens nationwide came to polling stations to cast ballots to elect deputies to the 15th National Assembly (NA) and all-level People’s Councils for the 2021-2026 tenure this morning, May 23.

At the polling station No. 062 at Kindergarten 7 in Ward 7, Tan Binh District, HCMC, everything had been ready since 6 a.m. for the citizens to cast ballots.

Due to the complicated Covid-19 situation, the voters had to strictly comply with preventive measures such as wearing face masks, having their body temperatures checked, completing the health declarations and using hand sanitizers. They were also required to keep a safe physical distance from each other.

Deputy Prime Minister Truong Hoa Binh was the first person to cast his vote to elect deputies to the NA and the HCMC People’s Council at this polling station.

Nguyen Trung Truc, a citizen from Ward 7, Tan Binh District, said he hoped his vote can contribute to electing highly-qualified deputies that will create a peaceful life for the people.

Below are photos taken by The Saigon Times reporters at the polling station No. 062 in Ward 7, Tan Binh District this morning. 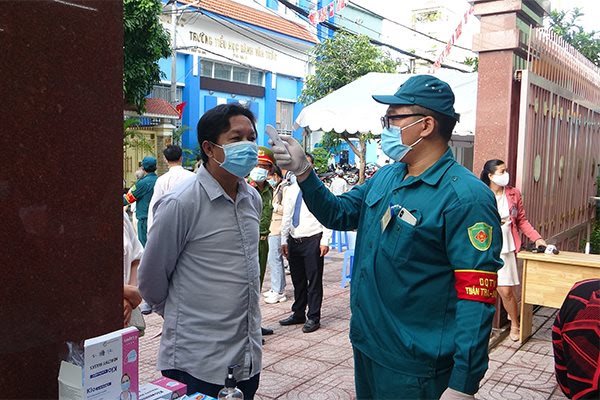 A man has his temperature checked before entering the polling station
RELATED NEWS
TAG:
Other news