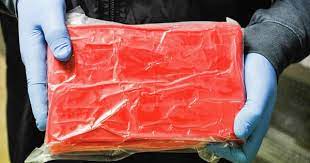 The largest-ever drug ring that operated via airway has been broken up by customs officers in Vietnam, with 16 suspects arrested and more than 127 kilograms of narcotics confiscated.

The Hanoi Customs Department under the General Department of Vietnam Customs had coordinated with customs officers at Noi Bai International Airport and relevant agencies to investigate the illegal ring since April 6.

Sixteen suspects have been apprehended so far, with 127.5 kilograms of narcotics confiscated.

Among the seized drugs, 94.2 kilograms were found at ring members’ places of residence, while the other 33.3 kilograms were discovered inside four derelict parcels at the warehouse of Noi Bai International Airport.

This is considered the largest drug ring operating via airway to be busted in Vietnam.

Chairman of the Hanoi People’s Committee Chu Ngoc Anh on Thursday awarded certificates of merit to officers under the municipal Customs Department and the customs unit at Noi Bai International Airport for the efforts in breaking up the illicit racket.