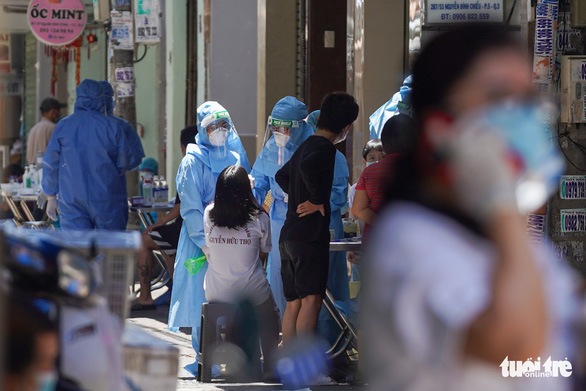 A noodle soup vendor and her two children were confirmed as COVID-19 patients in Ho Chi Minh City on Thursday, according to the municipal Center for Disease Control (HCDC).

The district is considered one of the central business hubs of the city.

Her retest came back positive for COVID-19 at the Ho Chi Minh City Hospital for Tropical Diseases on Thursday morning.

She had first tested positive at Pham Ngoc Thach Hospital in District 5 on Wednesday, after having visited Medic Medical Center, which is very crowded every day, at 254 Hoa Hao Street, District 10 on account of respiratory symptoms.

The Medic Medical Center has stopped receiving new patients as per an order from the local administration.

Preliminary contacting tracing then identified 15 of her direct contacts, two of whom tested positive on Thursday as well. Both are her children who live with her in the same house.

A test on another child who took her to the hospitals returned positive once the same day, pending further testing.

Their source of infection is unclear.

Authorities have locked down the 287 Nguyen Dinh Chieu alley and other related sites, fumigated the locations where the patients visited, tested their contacts, and proceeded with further contact tracing.

Another case in Go Vap District tested positive for the virus on Thursday afternoon, a source from the Ho Chi Minh City Department of Health told Tuoi Tre (Youth) newspaper.

Contact tracing, quarantine, and site disinfection are underway in association with this suspected case.

Vietnam is struggling with a fourth wave that broke out on April 27, following about a month without any known community transmission.

The country has registered 1,762 domestic infections, including 114 patients announced on Thursday, in 30 provinces and cities since that date.

The noodle soup vendor and her two children were counted in the 114 cases, which took Ho Chi Minh City’s total in this round to six.

The Ministry of Health has confirmed 4,809 local and imported coronavirus cases, including 2,689 recoveries, since the virus first hit Vietnam on January 23, 2021.

Three pathogen-related deaths were recorded on Thursday, bringing to the death toll to 39, most having suffered critical pre-existing health problems.

Four fatalities have been logged in the year to date.