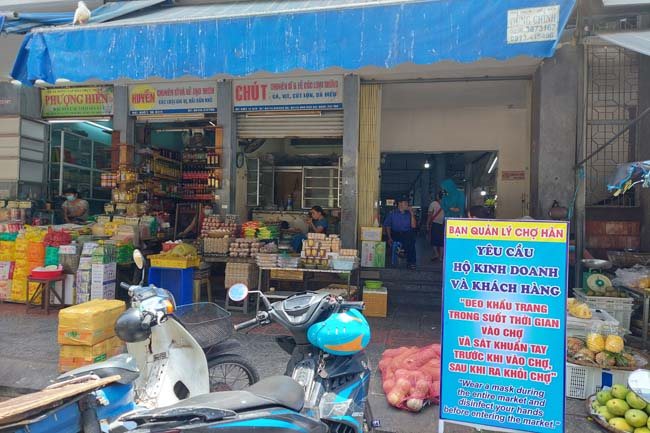 An entrance gate of Han Market in Danang City, one of the four biggest markets in the city, which will start accepting market coupons with a QR Code from May 24, 2021 - PHOTO: NHAN TAM

DANANG - In order to save the cost of printing a large number of market coupons and continue to limit large gatherings at the market, Danang City's government will next week add a QR Code on coupons so that a shopper can reuse a single coupon multiple times.

Specifically, from May 24, 2021, market coupons with a QR Code will be required at the entrance gates of four markets under the management of the Department of Industry and Trade and will be distributed to the residents of five wards ---Hai Chau I, Hai Chau I, Thanh Binh, Thuan Phuoc and Hoa Cuong Nam. Con, Han, Dong Da and Hoa Cuong are the four largest markets in the central city.

According to the Department of Industry and Trade, these markets have mobilized workers and been equipped with smart mobile devices with an Internet connection to scan the QR codes.

Households and market-goers can present the coupons with the QR Code to guards at the entrance gates before being allowed to enter.

Consumers can take a picture of their coupon, save it on their smartphones and present it to the guards.

Other consumers around the city who do not belong to the five wards will still use the one-time shopping coupons until further notice.

Previously, the People's Committee of Danang City began applying the “market coupon” policy throughout the city from May 8, 2021, to limit gatherings amid the Covid-19 outbreak.

Each household was given five coupons to go to the market every three days within 15 days. The market entry coupon is valid for every visit to any market in Danang City.

Today, 11:53
How Safe Is Vietnam for International Travelers?

Today, 11:13
West says Russia runs out of missiles, why its forces could strike Ukraine 258 times in a week