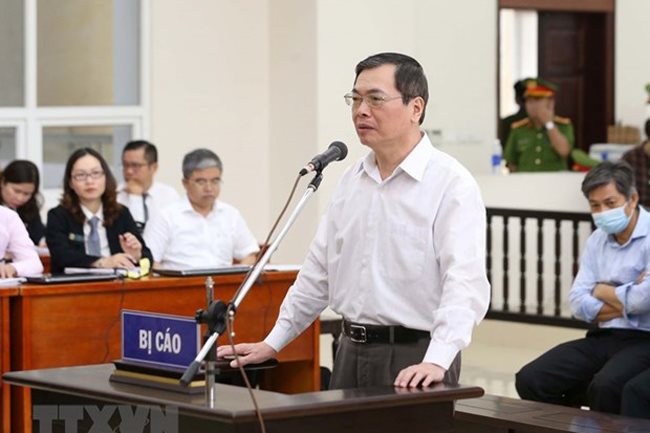 Vu Huy Hoang at the court. He has lodged an appeal against the court’s verdict against him for his violation in a case at Sabeco - PHOTO: VNA

HCMC - Former Minister of Industry and Trade Vu Huy Hoang has lodged an appeal against the first-instance verdict against him for his violations in a case at the Saigon Beer-Alcohol-Beverage Company (Sabeco).

He was handed down an 11-year prison term for violating regulations on the management and use of State assets, causing losses and wastefulness, according to the local media.

Hoang sought a shorter jail term and proposed the court review his violations in the case to redetermine his count.

Three weeks after handing down sentences against Hoang and nine other defendants for their involvement in the case, the Hanoi People's Court received the appeal of four defendants, Hoang, former head of the Ministry of Industry and Trade’s Light Industry Department Phan Chi Dung, former deputy director of the HCMC Department of Planning and Investment Lam Nguyen Khoi and former head of the HCMC Department of Planning and Investment’s Infrastructure Development Division Le Quang Minh.

The three others also demanded reductions in their penalties as they committed violations for the first time, had good records, honestly made declarations, cooperated with the competent agencies and were repentant for their violations.

Further, Khoi is suffering from a fatal disease.

Earlier, Dung got a prison term of nine years for the same charge as Hoang, while Khoi and Minh had to stay behind bars for 4.5 and 3.5 years, respectively, for infringing regulations on land management.

According to the court’s verdict, Hoang and Dung asked their subordinates to use the right to the land lot at 2-4-6 Hai Ba Trung Street, which was handed over to Sabeco to build its headquarters and a trade, service and office center, to set up the Sabeco Pearl Investment JSC to carry out the Saigon Me Linh Tower project at the location.

After Sabeco completed procedures for the project, the Ministry of Industry and Trade directed Sabeco to divest from the project. Sabeco illegally transferred the rights to use the land lot to Sabeco Pearl, causing a loss of over VND2.7 trillion for the State.

According to the court, Hoang approved the investment in the project but did not comply with the Government’s related resolutions. He later directed Sabeco to divest from the project, causing huge losses for the State.

Meanwhile, Dung was Hoang’s accomplice who signed documents proposing Hoang and former Deputy Minister of Industry and Trade Ho Thi Kim Thoa approve Sabeco’s execution of real estate projects that were not their main business sector, the establishment of Sabeco Pearl and Sabeco’s divestment from the project.

Khoi failed to consult with the competent agencies but proposed the municipal government allow Sabeco Pearl to become the investor of the project.