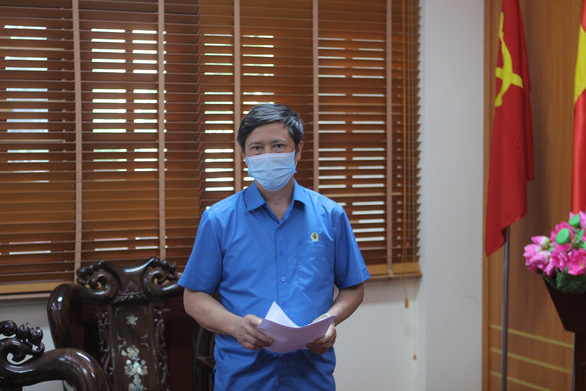 The administration in northern Bac Giang Province has requested the Vietnam General Confederation of Labor administer a relief package benefiting over 51,000 factory workers affected by the COVID-19 outbreak in local industrial zones.

A total of 51,042 factory workers of 54 companies have been either furloughed or isolated due to the recent COVID-19 cases found in the province, the majority from Van Trung, Quang Chau and Dinh Tram Industrial Zones, Nguyen Van Canh, president of the Bac Giang Confederation of Labor, said during a meeting between Bac Giang officials and the Vietnam General Confederation of Labor on Monday.

Canh urges the Vietnam General Confederation of Labor to formulate a relief scheme for workers and teachers affected by the epidemic.

As Canh sees it, Bac Giang is reporting a steep rise in daily cases, while the high concentration of workers in industrial zones poses even more risk of transmission.

The province is scrambling to roll out mass testing, but it is facing resistance from many workers at risk, Canh added.

During these tough times, Bac Giang must prioritize outbreak prevention while also organizing the national election, which would select legislators for Vietnam’s 14th National Assembly, on May 23, the provincial confederation's president pointed out.

The province has prepared plans to give voting access to factory workers who cannot afford to take leave on May 23, as well as some 40,000 workers who register as temporary residents. During the meeting, Ngo Duy Hieu, deputy president of the Vietnam General Confederation of Labor, affirmed that workers' health is inextricably linked to the economy’s well-being.

For that reason, grassroots-level labor unions must devise solutions to take care of workers' health during the upcoming election.

Hieu also promised a forthcoming policy to support workers on a large scale.

On behalf of the Vietnam General Confederation of Labor, Hieu handed a subsidy of VND200 million ($8,700) over to Bac Giang authorities which shall be administered to local workers affected by COVID-19.

Vietnam has logged 1,539 domestic coronavirus infections in 28 provinces and cities since April 27, when a fourth wave broke out after the country had spent roughly a month detecting no community transmission, according to the health ministry’s data.

Bac Giang recorded 527 of the cases.

Van Trung Industrial Park was identified as one of the outbreak clusters of the province, with 152 patients being found among almost 100,000 workers.

About 300 police officers were seconded on Monday from Hanoi to Bac Giang for help with COVID-19 prevention and control.