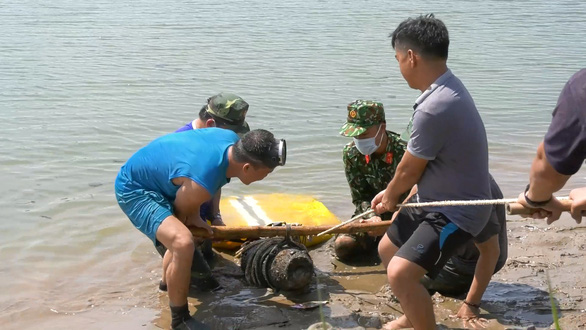 A 250-kilogram bomb discovered by a fisherman in central Vietnam’s Quang Tri Province was salvaged from the local Thach Han River by military officers on Tuesday.

In an attempt that took over three hours, the unexploded bomb disposal unit under the Quang Tri Military High Command, in cooperation with experts from the local Golden West Humanitarian Foundation, a U.S.-based nonprofit working on removal of unexploded ordnance (UXO), managed to pull the bomb out of the Thach Han river section in Quang Tri Town.

The bomb is identified as one of the MK 82 variety, made and used by U.S. forces during the war in Vietnam. It weighs about 250 kilograms, stretching 1.5 meters long and 27 centimeters wide.

The sunken bomb was tied to a buoy, then dragged to the shore by experts before being safely disposed of in a depot.

The ordnance was first detected by Tran Van Mua, a fisherman from Quang Tri Town, while he was cruising on the Thach Han River.

Quang Tri was considered the most heavily contaminated with unexploded ordnance in Vietnam following the war with the U.S., according to nonprofit entity Mines Advisory Group.

Wartime bombs and landmines have killed more than 3,430 local people and injured 5,100 others in Quang Tri after the war ended, national radio Voice of Vietnam reported.

The province is working to clear about 3,000 hectares of land each year to become the first Vietnamese locality to be safe from UXO accidents by 2025.

It aims to mobilize US$10-12 million annually from foreign non-governmental organizations to address UXO issues.