Home / News
Ho Chi Minh City needs breakthrough solutions
sonnguyen 19-05-2021, 05:49
If we believe that Ho Chi Minh City will be a very modern, fastest-growing, and the most dynamic city in Southeast Asia and the Asia-Pacific within the next ten or fifteen years, we will not be wrong. 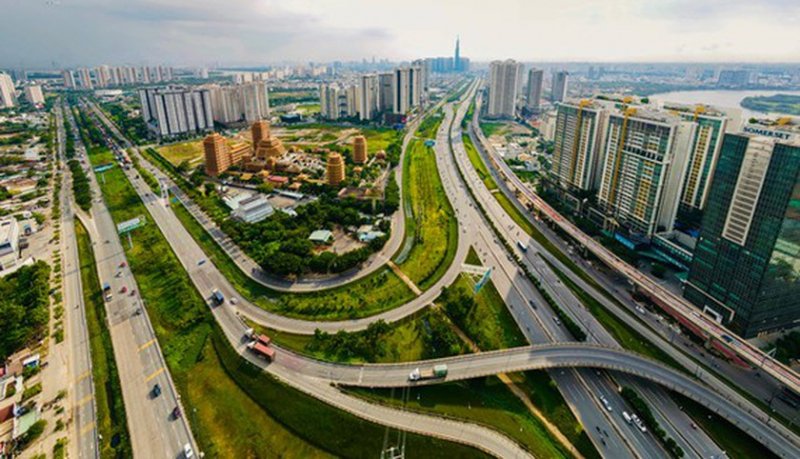 However, looking back at the development process in the last three decades, it is necessary to study many aspects to see and understand whether Ho Chi Minh City can still be the driving force for economic growth of the whole country, or whether we need to restructure and redesign the economic polices and its institutions.

The position and role of Ho Chi Minh City for the Southern region as well as the country was determined in early 1980s under Resolution 01/BCT of the Politburo. The process of opening up and integrating raised the level of the City as an economic center and a modern city comparable to other major cities in the ASEAN region, but now it seems that Ho Chi Minh City is beginning to lose that position, and its role as a growth engine for the Southern Economic Zone and the whole country, is now falling in very many aspects.

Although Ho Chi Minh City still contributes more than one-fifth of GDP and nearly 30% towards the national budget, the proportion in some industries and essential fields, such as import-export, industrial production, banking services, and investments, is gradually declining. Although, the Total Factor Productivity (TFP) has improved, this mainly depends on capital investment, productivity, and labor.

During the 20-year period from 1991 until 2010, the GDP growth rate in Ho Chi Minh City averaged 10.5% per year, about 1.5 times higher than the national GDP growth rate. But in the ten year period from 2011until 2020, the above figures declined to only 7.2% per year and 1.2 times higher than the national GDP growth rate. For the first time since 1975, in 2020, the economic growth rate of Ho Chi Minh City was only 45% of the national growth rate. Of course, the sudden occurrence of the Covid-19 pandemic has had a drastic blow, but it also shows that the resilience of the City to face abnormal fluctuations is very weak, revealing inadequacies and the poor adaptive capacity of the economic structure of the City in general.

Looking back at the development process in Ho Chi Minh City in the last 20 years, we see many problems of sustainable development. Firstly, the economic structure has no geo-economic strengths or sufficient human resources, nor is there a potential science and technology system in place. Secondly, since the mid-1990s, under urban spatial planning in the transportation system linking Ho Chi Minh City with the key economic region in the South, it seems that the urban construction is still not completely in place. Consequently, the target to increase the proportion of public passenger transport according to the 2010 and 2020 timeline has been missed many times. Besides this, the implementation of anti-flooding and anti-traffic jam programs have become more difficult and are an obstacle in exploiting the strengths of seaports in the area.

The many inadequacies in management for a future hi-tech Ho Chi Minh City was raised in early 2000s, with suggestions for an easy and understandable approach. Since then, the building of an urban government model was set up and the project is being built accordingly, but until now, it has been implemented only in small part, and only a silhouette of this dream is being deployed in the form of Thu Duc City.

Thus, challenges towards the development of Ho Chi Minh City in the next ten years must overcome psychological and institutional barriers, for breakthrough thinking in economic structuring and upgrade of institutions, and for Ho Chi Minh City to become a global business attraction. This effort must be prioritized for the sake of major investors, if they are to continue to see opportunities in Ho Chi Minh City.

The period of 2021 until 2030 will have decisive significance for turning our country into an industrial country, and must be the stage that shows the highest aspiration of the nation to rise. The consensus and determination of the whole political system to achieve high and sustainable economic growth will be vital for this to happen. Therefore, the development of Ho Chi Minh City from the point of a regional economy, including development and forming the economic structure of the Southern economic zone is crucial.

On 22 December 2017, the Prime Minister issued Decision 2076/QD-TTG adjusting the Regional Plan of Ho Chi Minh City to 2030 with a vision until 2050, which included urban centers of eight provinces and cities of the Southern economic zone, within a radius of about 100km to150km. The area will have an expected population of about 25 million people by 2030, and will link with 20 cities with a connected transportation system. The goal is to develop the Ho Chi Minh City Region into a large urban area through dynamic and sustainable development, while also playing an important role in Southeast Asia and in the world.

It is also necessary to adapt to an unexpected post Covid-19 scenario. In coming years or decades, unpredictability will be a factor in many fields of geopolitics, geo-economics, international trade, globalization, production chain, circulation chain, commodity products, several essential services and technology, with visible changes everywhere. The perennial traditional problems in developing countries like Vietnam will completely change in the future.

Therefore, the biggest challenge for Vietnam in general, and Ho Chi Minh City in particular, is how to design the economic policies that can adapt to the oncoming changes across the world. Ho Chi Minh City needs to put a digital transformation program as the main focus for the economy to move forward towards sustainability in the period of 2021 to 2025. The City must take the lead in the successful implementation of the National Digital Transformation Program issued by the Government in mid-2020.

For identifying the various problems facing Ho Chi Minh City now and in the coming years, it is necessary to give priority to policies and breakthrough solutions that will be relevant to future needs. One important one will be a breakthrough in transport infrastructure connecting the entire region, according to the Ho Chi Minh City Traffic Plan approved by the Prime Minister under Decision 568/QD-TTG dated 8 April 2013, with plan until 2020 and thereafter. However, so far, the implementation of this vital project has just been dragging.

The urban management model is suitable for maximizing the strength of Ho Chi Minh City, to an elevated position and role in the country. Currently, Ho Chi Minh City has more than 300,000 businesses and more than 350,000 individual business and production establishments, in a nearly 10 million populous, which is still a modest number. However, the weaknesses in infrastructure and some policies, have not attracted multinational corporations and companies of regional and international scale such as in Singapore, Bangkok, and Kuala Lumpur. So far, there is still no gigantic pull, or greater incentive to attract and draw vital small, medium and large enterprises.