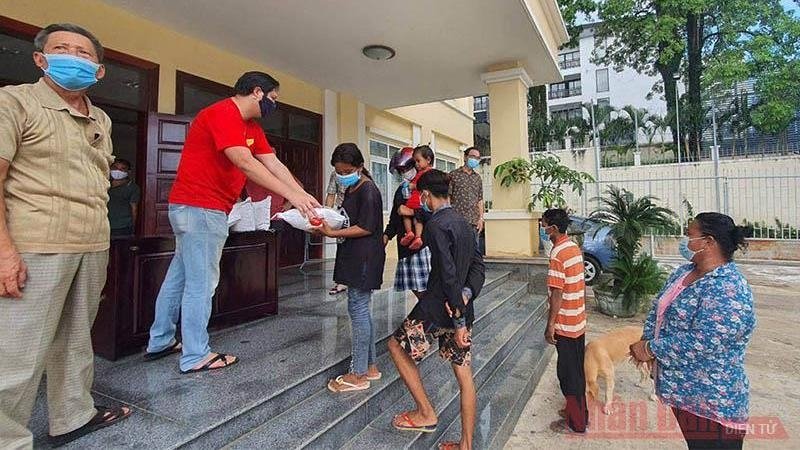 The Consulate General of Vietnam in Preah Sihanouk province presenting relief gifts to Vietnamese and Cambodian families in the locality. (Photo: NDO)

NDO - The Consulate General of Vietnam in Cambodia’s Preah Sihanouk province, in collaboration with the provincial Khmer-Vietnam Association, provided aid to local Vietnamese and Cambodian people who were affected by COVID-19 pandemic on May 16.

The relief gifts, worth US$15 each, were handed presented to 400 Vietnamese families and more than 30 Cambodian households.

Chairman of the Khmer – Vietnam Association in Preah Sihanouk Province Tran Van Nam said that over the past month the provincial government has applied a blockade to prevent the spread of the epidemic, greatly affecting the local people’s work and life.

He gave his sincere thanks to Vietnamese Party, State, Consulate General and donors for their valuable support to the Overseas Vietnamese in the province while mobilising them to temporarily not return home at the current time to avoid further difficulties for domestic forces.

In recent time, the Consulate General of Vietnam in Preah Sihanouk paid many visits and provided relief gifts to hundreds of families in the areas put under blockades.

* Also on the same day, the Quang Binh Provincial Party Committee and People’s Councils presented many equipment worth total over VND2.2 billion (nearly US$96,000) for the COVID-19 prevention and control to the provinces of Champasak and Savannakhet.

Earlier, Quang Binh Province provided aid in the form of equipment and necessities worth over VND2.2 billion to Khammouane Province.