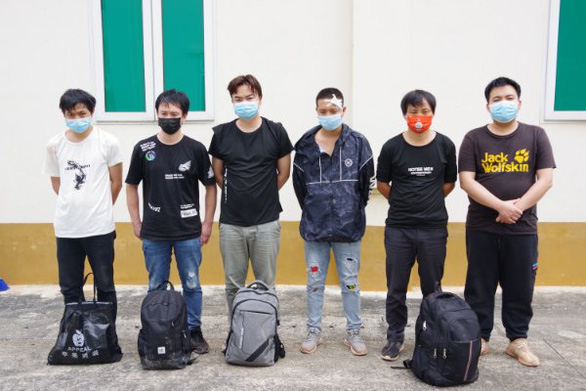 Police and border guards of the northern province of Lang Son have nabbed several members of a smuggling ring who sneaked Chinese nationals into Vietnam.

The smugglers were intercepted on Saturday by a cohort involving border guards of Lang Son Province and Chi Ma Border Gate and provincial police forces.

The arrests stemmed from the detection of six Chinese border jumpers at around 00:45 on Saturday.

After entering Vietnam illegally through a route monitored by the border guards of Chi Ma Border Gate, they boarded a seven-seater car driven by Le Van Luu, 38, from northern Quang Ninh Province to travel further into the country.

However, the group was stopped and detained by police shortly after.

During inspection, Luu claimed that a woman named Kieu from Bac Tu Liem District of Hanoi promised him VND10 million (US$434) if he managed to fetch the Chinese nationals to northern Bac Ninh Province.

The three accomplices were subsequently arrested by police while they were heading to Lang Son City, the capital of the namesake province.

Border guards in Lang Son are cooperating with functional forces to clear the case.

The country requires all arrivals from outside the country to undergo different forms of quarantine to stem the spread of COVID-19.

Many border jumpers have been found trying to enter the country illegally in order to duck the mandatory quarantine.

Vietnam has logged 1,205 domestic coronavirus infections in 26 provinces and cities since April 27, when a fourth wave broke out after the country had spent roughly a month detecting no community transmission, according to the health ministry’s data.

The country has documented 4,242 local and imported COVID-19 infections as of Monday afternoon, with 2,668 recoveries and 37 deaths.