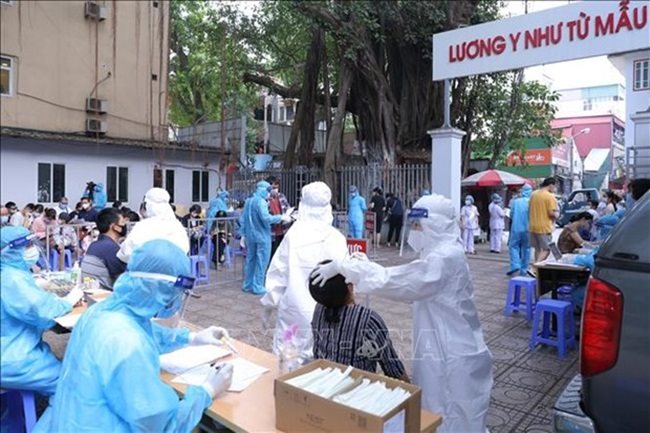 HCMC – The Ministry of Health tonight, May 16, reported 57 new Covid-19 cases, both imported and locally transmitted, taking the day's total number of infections to 187, the most infections recorded in a single day so far.

Among the community-transmitted cases tonight, Bac Ninh recorded the largest number at 24.

According to the Ministry of Health, a batch of nearly 1.7 million doses of AstraZenceca’s Covid-19 vaccine provided by Covax Facility was transported to Vietnam this afternoon. The vaccine is being stored at the National Institute of Hygiene and Epidemiology before being distributed to localities.

This is the second Covid-19 vaccine batch that COVAX Facility has provided to Vietnam.

In related news, Bac Giang Chairman Le Anh Duong, at a meeting with the national steering committee for Covid-19 infection prevention and control today, said the province was inexperienced in curbing the pandemic in industrial parks. With the support of the Ministry of Health and other localities, it can test 100,000 samples a day, meeting only half of the demand.

He also suggested Deputy Prime Minister Vu Duc Dam to assign the Ministry of National Defense to help it build a field hospital.

Deputy Minister of Health Nguyen Truong Son assessed the situation in Bac Giang complicated, saying that the Ministry of Health had formed a unit to support the province in tracing and testing work.

Son asked Bach Mai Hospital in Hanoi and some other units to build a field hospital with 700-800 beds in Bac Giang.

He also required the province to set up at least 60 teams to inspect the safety in industrial parks. Those failing to comply with anti-pandemic regulations must be suspended.

Hanoi Chairman Chu Ngoc Anh has informed that the city would support Bac Giang to test more than 10,000 samples and sterilize the Van Trung Industrial Park. Experts from Hanoi will provide Bac Giang with anti-pandemic instructions and assess the transmission risk at the industrial park.

In another development, seven Chinese people, after completing their quarantine period in Lang Son, have come to a hotel in Danang though they had earlier registered to come to Mensa Industries Co., Ltd in Quang Ngai Province, according to the government of Danang’s Hai Chau District.

The seven entered Vietnam on April 23 and was quarantined in Lang Son until May 14.

After detecting the case, Danang authorities tested the seven people and the results came back negative.

The city has asked the Quang Ngai Health Department to receive these people. The hotel in Danang has been suspended for seven days, while the seven have been fined.

Today, 17:43
How consumer behaviour in Vietnam is changing during the fourth COVID-19 wave?