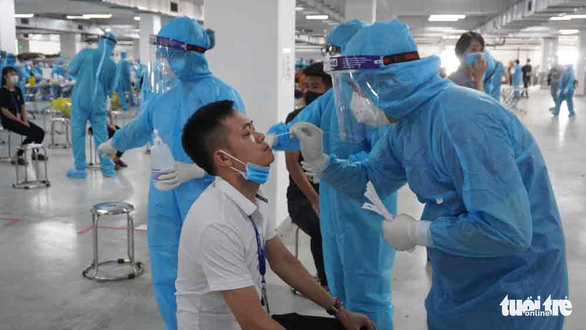 The fourth wave of local coronavirus infections continues to get worse as the Ministry of Health recorded 127 more cases in its morning update.

All of the new cases were detected in already isolated areas, the health ministry said.

Ninety-eight of them were registered in Bac Giang Province in the northern region, the majority at an industrial park.

Vietnam is combating the fourth wave of COVID-19 that broke out on April 27.

The country has confirmed 1,080 domestic cases in 26 provinces and cities ever since, after having spent around a month without detecting any community transmission.

Bac Giang is occupying the largest proportion with 314 patients, followed by Bac Ninh Province with 217, Hanoi with 213, Da Nang with 123, and Vinh Phuc Province with 83.

Ho Chi Minh City has logged merely one case in the ongoing wave.

Many provinces and cities, including Hanoi and Ho Chi Minh City, have told students to switch to remote learning and closed down non-essential services like karaoke parlors, gyms, cinemas, nightclubs, online game centers, and others to prevent further virus spread.

Social distancing measures are in place in Vietnam now, with crowded events curbed and face mask donning mandatory in public.

Experts have asserted that this wave is more serious than the previous rounds as patients have been found catching the ‘double mutant’ Indian variant that has been raging in India.

Vietnam’s national COVID-19 tally has risen to 4,112 domestic and imported infections, according to the health ministry’s data.

The country had administered over 977,000 coronavirus vaccine shots by the end of Saturday, the majority to medical staff and other frontline workers.