Home / News
HCMC puts stations for entry and exit management into operation
ChandraGarran04 15-05-2021, 22:05
12 Covid-19 monitoring and control stations in land, sea border crossings throughout the city were re-established, starting at 0.00 am on May 15. 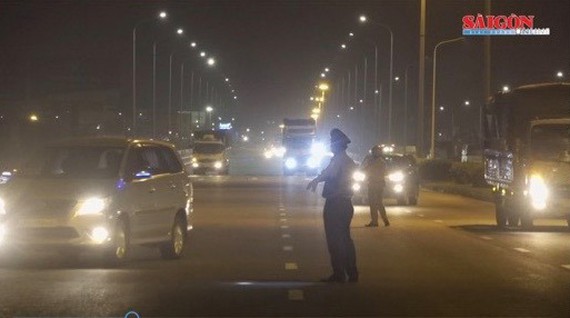 At a monitoring and control stations Healthcare workers check bus passengers' temperatures. The stations are placed at the city’s gateways and borders with neighbouring provinces of Long An, Tay Ninh, Binh Duong and Dong Nai.
The checkpoints include Long Phuoc toll collection station on HCMC-Long Thanh-Dau Giay Expressway, which connects HCM city and Dong Nai province; the toll station on HCMC- Trung Luong Expressway before the lead to Tan Tao - Cho Dem Expressway. They are also located at the end of the Doi Brdige on Tran Van Giau Street; at the Ba Lang intersection on the National Highway 1A; on the National Highway 22; Phu Cuong Bridge on the provincial road 8; Vinh Binh Bridge on National Highway 13; Song Than Overpass on National Highway 1A, on National Highways 1K and 50; in front of The People's Security University on National Highway 1A in Thu Duc City; and Dong Nai Bridge. The HCMC Government asked the municipal departments of Police and Health along with relevant units and local authorities of districts and Thu Duc City to take the responsibility of implementing inspection activities and controlling people and vehicles that enter and exit the city. The stations will operate twenty-four hours a day.