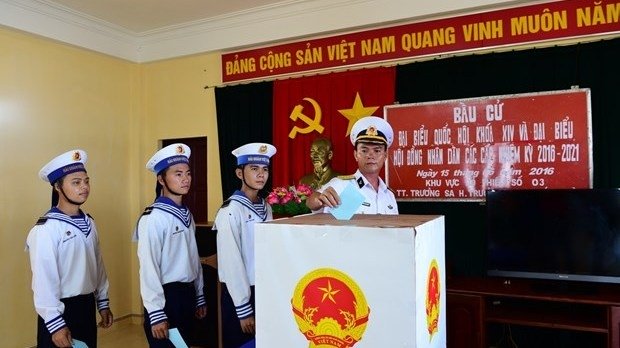 Officers and soldiers in Truong Sa District cast their ballots during the previous elections in 2016 (Photo: baohaiquanvietnam.vn)

NDO – The National Election Council (NEC) has permitted the holding of early voting on islands of Truong Sa Township and the communes of Sinh Ton and Song Tu Tay of the Truong Sa Island District, Khanh Hoa Province, on May 16.

Meanwhile, voters in the constituency of Truong Sa Lon Island will cast ballots on election day, May 23.

The election council of Truong Sa District was asked to review the preparations for early voting while paying due attention to COVID-19 prevention and control measures.

Khanh Hoa Province has 13 candidates for the upcoming National Assembly (NA) election, including three nominated by central agencies, who will compete for seven seats in of the 15th NA. The province has more than 977,000 constituents.

Voters at polling stations in seven communes in Dak Glei District, and the border guard station in Dak Xu Commune in Ngoc Hoi District, Kon Tum Province, will cast their ballots on May 22, one day ahead of schedule, as approved by the NEC.

Voting will also take place that day at polling stations of armed forces in the districts of Ea Sup and Buon Don and the city of Buon Ma Thuot in Dak Lak Province. 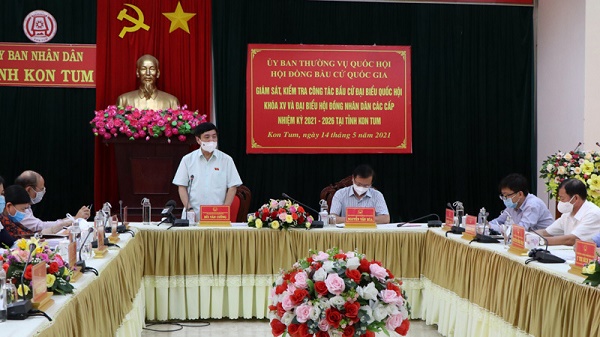 PCC member, NA Secretary General, Chairman of the NA Office and Chief of the NEC Office Bui Van Cuong inspects preparations for the upcoming elections of the NA and People’s Councils at all levels for the 2021-2026 term.

On May 14, Party Central Committee (PCC) member, NA Secretary General, Chairman of the NA Office and Chief of the NEC Office Bui Van Cuong visited the Central Highlands province of Kon Tum to inspect preparations for the upcoming elections of the NA and People’s Councils at all levels for the 2021-2026 term.

While applauding the province’s preparations for the nation’s significant event, he asked for further publicity campaigns in order to achieve the highest voter turnout possible.

In the context of complicated developments of COVID-19 pandemic, the requested highest effort to ensure safety and security at voting units.

The same day, an inspection delegation from the NEC led by PCC member and Minister of Home Affairs Pham Thi Thanh Tra held working sessions with the election committee in the northern province of Hoa Binh regarding the preparations for the upcoming elections.

Acknowledging the province's preparations so far, Minister Tra asked the provincial election committee to continue following election documents and directions while paying attention to the operation of election groups and enhancing inspection activities to promptly handle any arising problems.