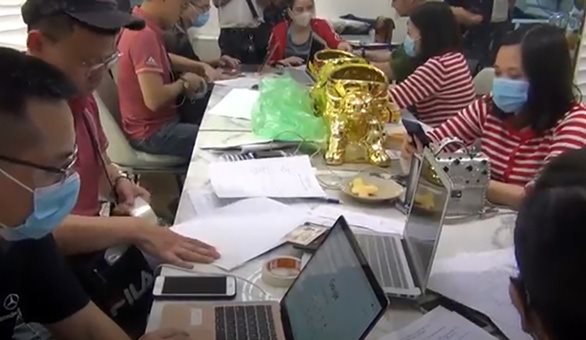 HCMC – The police in Hanoi and HCMC have jointly cracked down on four illegal gold, cryptocurrency trading exchanges, namely Rforex.com, Yaibroker, Vistaforex and Exswiss, with scale worth hundreds of billions of dongs.

The police in the two major cities mobilized nearly 300 police officers who were divided into 21 working groups and sent to 11 provinces and cities to bust the ring.

The forces found out that these suspects had established, managed and operated the four illegal exchanges and many other websites whose interfaces were similar to these platforms.

These exchanges were also connected with an app called Meta trader 5 to lure nearly 12,000 participants from 27 countries and regions. Among them, the Rforex.com platform was operated under the legal entity of Britain’s Rforex Ltd Company with total transaction amount worth hundreds of billions of dong, with some participants even spending over VND10 billion on joining this platform.

The suspects used techniques to intervene in the transaction handling system and control the accounts of participants in an attempt to appropriate assets. They could even act to decide who would be winners or losers.

The police warned that Vietnam has yet to license any forex investment platforms. To bend the law, many companies disguised as foreign exchanges lured and swindled individual investors by offering relatively high interest rates. Accordingly, the participants are considered to have abetted illegal activities.