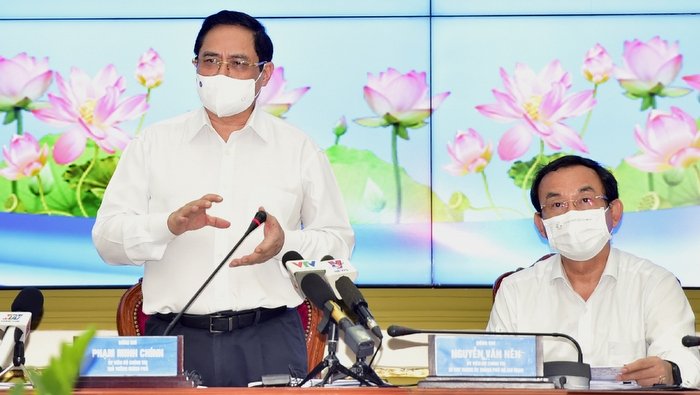 NDO/VNA – Prime Minister Pham Minh Chinh held a working session with key officials of Ho Chi Minh City on May 13, his first meeting of the kind with a locality after taking up the top position in the Government, which demonstrated the special importance that the PM and the Government attach to the southern hub.

While acknowledging the efforts and important achievements that Ho Chi Minh City has made in the past years, PM Chinh noted that the city has failed to achieve socio-economic targets in the 2016-2020 period. He also pointed to outstanding problems such as slow disbursement of public investment capital, irrational land use structure, delayed equitisation of State-owned enterprises, and lower-than-expected human resource quality.

To address the problems, the PM suggested several major tasks that the city should implement, which are to strengthen the Party organisation, build clean and democratic administrative system with good discipline and order, and push ahead with administrative reform to meet requirements in the new stage of development.

In the immediate future, the city should strictly implement the Party and Government’s directions on COVID-19 prevention and control, and make thorough preparations for the safe and successful organisation of the elections of deputies to the 15th National Assembly and all-level People’s Councils in the 2021-2026 tenure, he said.

PM Chinh said the Government basically agrees with the 15 proposals of the city and suggested one more idea on building a regional and international financial centre.

Ho Chi Minh City posted a 4.58% economic growth year-on-year in the first quarter of this year, along with a 14% increase in export value and US$1.1 billion in foreign investment, while doing well in containing COVID-19, Chairman of the city People’s Committee Nguyen Thanh Phong reported.

He added that the city has set nine key tasks in socio-economic development, including a 6.5% economic growth for 2021 and keeping the pandemic under control.

During his working trip to the city, the PM visited and gave encouragement to medical workers at the Cho Ray Hospital and the University Medical Centre.

“Frontline forces made important and decisive contributions to pandemic prevention and control as well as the settlement of consequences,” he said, stressing that the Party, State and people recognise and highly value the contribution of the contingent of medical workers.