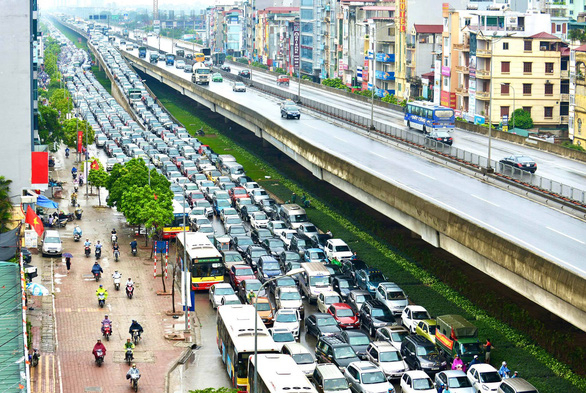 Leaders of Hanoi and four other northern provinces, including Hung Yen, Bac Ninh, Vinh Phuc, and Bac Giang, are seeking in-principle approval from the prime minister for the Ring Road No. 4 project estimated to cost up to VND160 trillion (US$6.9 billion).

The ring road is designed to traverse all five provinces and cities, according to the project.

During the meeting, Dinh Tien Dung, secretary of the Hanoi Party Committee, affirmed that a new ring road is needed for the capital city.

Leaders of the five localities concurred that Elevated Ring Road No. 3, which encircles central Hanoi, is already overwhelmed, undertaking a traffic volume 2.5 times bigger than its designed capacity at rush hour.

Traffic jams are also constant at entrances to the ring road, particularly during holidays and on weekends.

The consortium anticipates that the upcoming Ring Road No. 4 will provide the basis for growth in various sectors.

It is preferred that the project is run by the consortium as a whole instead of dividing it into sections for each local authority to administer, their proposal stated.

The new ring road will require a budget of VND105 trillion (US$4.5 billion), which could go up to VND135 trillion ($5.8 billion) if it is built entirely as viaducts, the plan estimates.

Site clearance may cost the project around VND25 trillion ($1.1 billion).

The consortium suggest that the prime minister approve the viaduct option, similar to Elevated Ring Road No. 3.

As public budget would not be able to cover the entire cost, the consortium will look into funding the project through public-private partnership (PPP) sources.

As per the prime minister-approved master plan for Hanoi transport infrastructure, Ring Road No. 4 will stretch around 98 kilometers, with 56.5 kilometers in the capital's territory.

The route will span over Hung Yen and Bac Ninh, while its ends will be placed in Vinh Phuc and Bac Giang.