Home / News
Vietnam association for AO victims issues statement on Tran To Nga's lawsuit
tranthuy02 13-05-2021, 11:16
The Vietnam Association for Victims of Agent Orange/dioxin (VAVA) on May 12 issued a statement regarding the Crown Court of Evry City in France’s May 10 ruling on Vietnamese-French citizen Tran To Nga’s lawsuit against US firms that manufactured the toxic AO defoliant used by US forces during the war in Vietnam.The court said it did not have jurisdiction to judge a case involving the US Government’s wartime actions, ruling that the US firms were acting on orders from the US Government which was engaged in a “sovereign act”.

VAVA’s statement emphasised that the court made a decision that was not based on the principles of existing international law and did not sufficiently consider relevant factors.

Its decision rejecting Nga’s lawsuit shows that it denied the right of French citizens who suffered damage from foreign legal entities to be recognised by the French law.

The statement also mentioned an announcement from Nga’s lawyers in which they said the court applied an obsolete definition of the immunity of jurisdiction principle that contradicted modern principles of international and national law.

The court did not take into account relevant factors such as US companies being free to participate in tenders to produce toxic chemicals for profit and not being forced to do so.

It also did not consider the fact that the chemical companies had known that dioxin was a highly toxic substance but still intentionally changed the technical process to shorten the production time of AO, thus reducing costs and increasing profits.

VAVA emphasised that the Evry court should reconsider its decision and expected that an appeal court would consider all relevant factors to make a ruling requiring US chemical companies to pay compensation.

The association also affirmed its backing for Nga’s appeal and hoped that all lovers of peace, justice and progress around the world would support her and other AO victims in Vietnam.

Nga, 79, accused 14 multinational chemical companies, including herbicide manufacturer Monsanto (now under Germany’s Bayer Group), of supplying the herbicide and defoliant chemical that was used extensively by the US army between 1961 and 1971 in Vietnam, causing serious consequences for 4 million people and severely poisoning the environment.

An AO victim herself, Nga has pursued the lawsuit for over a decade, including six years in court. 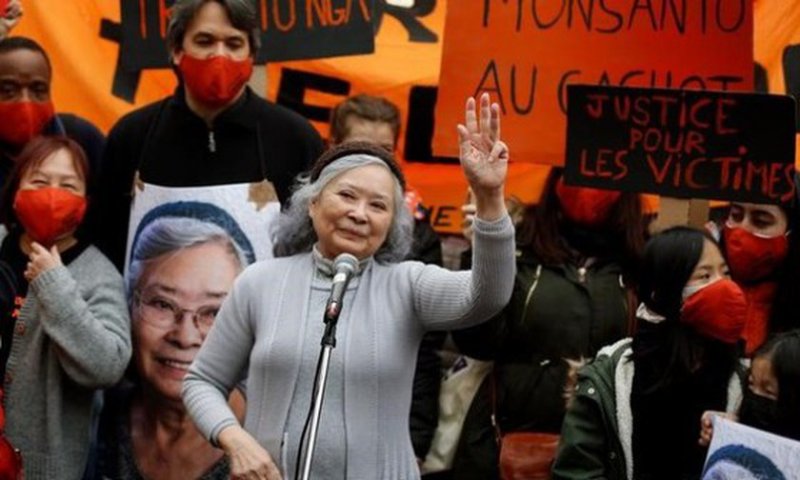 Vietnamese-French citizen Tran To Nga
She graduated from university in Hanoi in 1966 and became a war correspondent for the Liberation News Agency. She worked in some of the most heavily AO/dioxin affected areas in southern Vietnam, such as Cu Chi, Ben Cat, and along the Ho Chi Minh Trail, ultimately being contaminated herself. She suffers from a number of acute diseases. Of her three children, the first died of heart defects and the second suffers from a blood disease. A grandchild of Nga also suffers from AO-related illnesses.

With support from several non-governmental organisations, she filed the lawsuit against the US companies for causing lasting harm to the health of herself, her children and countless others, and destroying the environment.
RELATED NEWS
TAG:
Other news