Minister of Foreign Affairs Bui Thanh Son has affirmed Vietnam’s strong commitments to multilateralism, international solidarity and joint efforts for peace and development in the world. 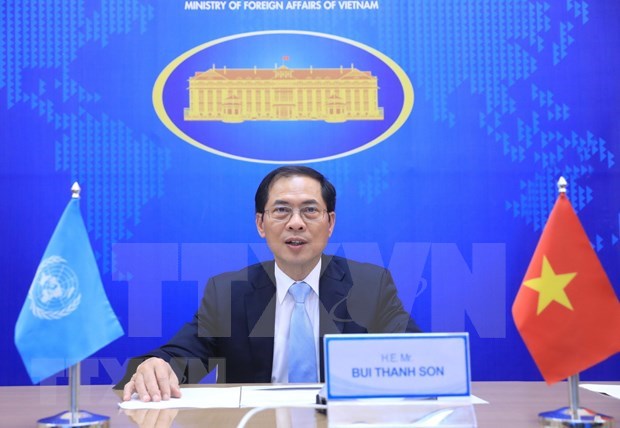 He recalled the UNSC’s commitments in promoting multilateralism, abiding by the UN Charter and building international order basing on international law as stated in the UNSC President’s Statement in January 2020 when Vietnam held the rotating Presidency.

Son called on the international community to promote the culture of complying with the UN Charter and international law, opposing power politics and the use of force in international relations.

He underlined the need to continue strengthening collaboration between the UN and regional organisations, while highlighting the central role and efforts of the Association of Southeast Asian Nations (ASEAN) in dealing with regional and international issues.

The minister also encouraged multilateral institutions, including the UNSC, to work harder to reform towards increasing transparency, democracy, efficiency and the representation of member countries.

On the occasion, he recalled that Vietnam’s Dien Bien Phu Victory on May 7, 1954 played an important role in promoting the movement of struggling for peace, independence, national liberation and anti-imperialism, helping to facilitate democratisation in the international system with the UN being the centre and Vietnam being a member.

At the session, President of the UN General Assembly Volkan Bozkir stressed the crucial role of multilateralism in the settlement of peace and security issues in the world.

He showed deep concern about the situation in hotspots such as Myanmar and Syria, while calling for the enhancement of international cooperation in coping with global challenges such as conflicts, hunger and poverty, and the COVID-19 pandemic.

Participants reaffirmed their support to multilateralism and the UN-centred international system, calling all parties to uphold the UN Charter and fundamental principles of international law. They also highlighted their commitments in promoting multilateral cooperation in the settlement of common matters./. VNA