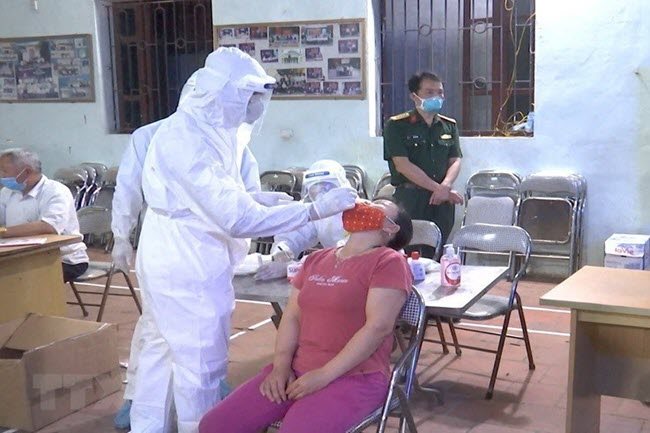 A medical worker takes samples of a local woman in Bac Ninh Province’s Thuan Thanh District for Covid-19 testing. The Ministry of Health confirmed 78 fresh Covid-19 patients this evening, May 8, with 65 of them catching the deadly disease through community transmission – PHOTO: VNA

HCMC – The Ministry of Health confirmed 78 fresh Covid-19 patients this evening, May 8, with 65 of them catching the deadly disease through community transmission, raising the country’s total locally-infected cases during the latest coronavirus wave since April 27 to 241.

All the 13 new imported cases were placed in quarantine upon their arrival in Vietnam between April 4 and May 6.

As for the fresh locally-transmitted patients, the capital city of Hanoi reported the highest number at 22. Of them, the National Hospital for Tropical Diseases in the city’s Dong Anh District recorded 14 cases, including 10 relatives of patients and four patients who are being treated at the hospital. The eight other cases had visited the National Hospital for Tropical Diseases, the K Hospital in Hanoi or had come into close contact with previously confirmed Covid-19 patients.

Up to now, the pandemic has spread to 23 provinces and cities in the country during the latest resurgence.

With the latest 65 community-infected cases, the total number of cases by community transmission since the pandemic hit Vietnam early last year has reached 1,811. Also, the country’s tally amounted to 3,230 cases, with 2,602 recoveries and 35 deaths.

In a related development, following the detection of the first locally-infected case in Thua Thien-Hue Province in this resurgence, Phan Ngoc Tho, chairman of the provincial government, decided to impose social distancing on Lang Co and Phong Dien towns, Phong Thu and Phong Hoa communes starting tomorrow, May 9. The province also increased the number of Covid-19 checkpoints set up on the National Highways 1A and 49B from five to eight to supervise people entering the province.

The central province of Quang Tri made the same move by asking Hai Lang District’s Hai Chanh and Hai Son communes to implement social distancing starting 6 p.m. today, as a confirmed coronavirus patient had visited some locations in the two communes. The district also restricted large gatherings and its students were allowed to stay home from today until further notice. Contact tracing efforts are underway, according to VnExpress.

In Bac Ninh, due to the complicated Covid-19 situation with 46 new infections reported from May 5 to date in five out of eight districts in the province, the provincial government has issued a dispatch asking students of all grades to stay at home from May 10 until further notice, VietnamPlus reported.