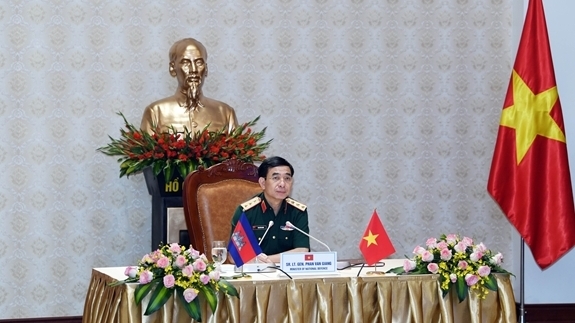 NDO/VNA - Minister of National Defence Senior Lieutenant General Phan Van Giang on May 7 expressed his hope that Vietnam and Cambodia will make every effort to strengthen and deepen their defence links, maintaining its role as a pillar of bilateral ties.

Regarding the ongoing COVID-19 outbreak in Cambodia, Giang said Vietnam stands side-by-side with its neighbour in the pandemic fight and will do its best to help it overcome the difficulties.

The Cambodian minister, for his part, thanked Vietnam for its timely dispatch of experts and medical supplies to Cambodia.

He congratulated Giang on his appointment as Minister of National Defence and expressed his belief that he will make a significant contribution to cooperation between the armies of the two countries.

The two ministers said that, amid COVID-19, the Vietnamese and Cambodian defence ministries have sought suitable and effective forms of cooperation, especially in training, border protection, and mutual support in COVID-19 prevention and control.

They stressed the need for the two sides to further revamp their cooperation methods, particularly in political and ideological education, the maintenance of defence policy dialogue mechanism, personnel training, management of the shared borderline and the fight against cross-border crime, smuggling, trade fraud, drug trafficking, and illegal exit and entry.

The two countries will also support each other at multilateral forums to which both are members, the ministers promised.