Japan’s Foreign Minister Toshimitsu Motegi on May 5 voiced grave concerns over China’s unilateral attempts to change the status quo in the East China Sea and the East Sea, during a meeting of the G7 foreign ministers in London, the UK. 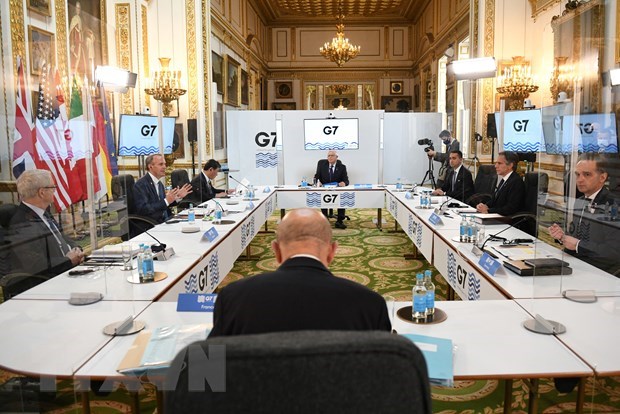 At the meeting of the G7 foreign ministers in London, the UK. (Photo: VNA)

Japan released the 2021 Diplomatic Bluebook on April 27, which states that China’s covert military expansion and increasing unilateral efforts to change the status quo in the East China Sea and the East Sea raise strong security concerns in the region and the international community.

China has recently continued to take action that triggers tensions in the East Sea, including the announcement that it would guarantee the enforcement of the fishing ban that took effect on May 1, 2021, on the sea area covering part of the Gulf of Tonkin and Vietnam’s Hoang Sa (Paracel) archipelago, and continue to deploy ships to Bai Ba Dau in Vietnam’s Truong Sa (Spratly) archipelago.

Speaking at a press conference on April 29, Deputy Spokesman of the Ministry of Foreign Affairs Doan Khac Viet said that Vietnam has sufficient legal grounds and historical evidence testifying to its sovereignty over the Hoang Sa and Truong Sa archipelagos, as well as its legal rights and interests towards sea areas identified in line with the 1982 United Nations Convention on the Law of the Sea (UNCLOS).

He again declared that any act harming Vietnam’s sovereignty over the Hoang Sa and Truong Sa archipelagos, as well as the country’s sovereignty, sovereign rights, and jurisdiction over its sea areas, is valueless and not recognised./. VNA