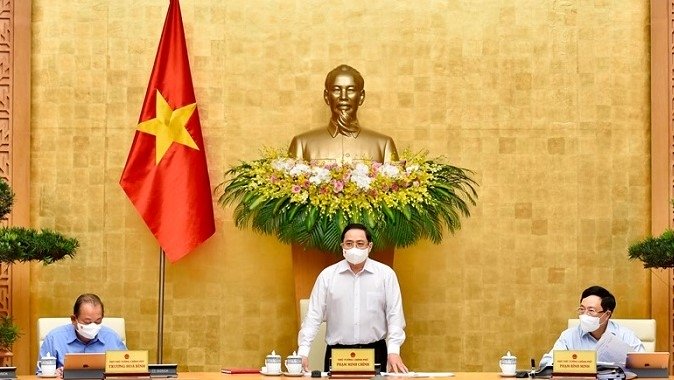 NDO/VNA – Prime Minister Pham Minh Chinh on May 5 presided over the Government’s April meeting, which was the first meeting of the Cabinet after it completed the personnel work last month.

During the meeting, Government members mulled over the COVID-19 fight and preparations for the upcoming elections of deputies to the 15th National Assembly and all-level People’s Councils for the 2021-2026 tenure.

They also looked into the Government’s draft action programme on the implementation of the Resolution adopted at the 13th National Party Congress, and the socio-economic situation in April and the first four months of this year, among others.

In his remarks, PM Chinh highlighted significant achievements in the macro-economy, export and investment attraction, notably inflation control, which are regarded as the best since 2016.

The government leader, however, pointed out difficulties and challenges such as the complex developments of the COVID-19 pandemic and its socio-economic impacts, plus “land fever” and issues regarding the stock market.

Thanks to the timely instructions of the Government, ministers and the State Bank of Vietnam, the situation has got stable, he said, stressing the importance of monetary and banking policies to the macro economy.

To complete the dual goals of socio-economic development and pandemic combat, PM Chinh asked ministries and agencies to review and perfect mechanisms and policies, saying priorities should be given to resources in service of national development.

Greater efforts are also needed to study and implement transport projects in the Mekong Delta, the Central Highlands and key economic regions, the leader said.

Regarding the pandemic fight, PM Chinh requested agencies to stay alert, creative and flexible in the work, saying information must be objective to encourage people to actively engage in the combat and overcome pandemic consequences.

He called on Vietnamese people both at home and abroad to voluntarily observe COVID-19 prevention and control regulations.

The PM also highlighted preparations for the upcoming elections of deputies to the 15th legislature and all-level People’s Councils, as well as the national high school graduation exam.