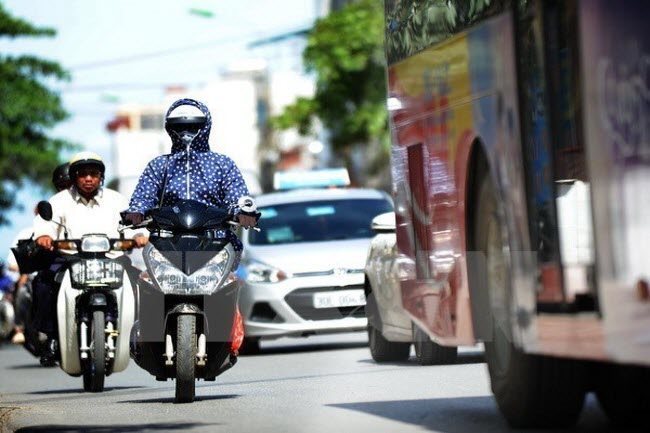 A motorcyclist wears protective clothing amid hot weather. The southern provinces will witness hot weather throughout May - PHOTO: VNA

HCMC - The Hydrometeorological Forecasting Center for Southern Region stated that the southern provinces will witness hot weather throughout May, with temperatures expecting to reach 35 degrees Celsius or even higher.

May 4 was a sunny day for many areas within the Southern region as the Eastern provinces and some areas in the Western provinces experienced hot weather, with the temperature oscillating between 35 and 36 degrees Celsius at 1.00 p.m.

Throughout May 5, most southern provinces will experience sunny weather, which will gradually intensify in the afternoon, the local media reported.

The intensity of the heat in the Southern region will decline as the areas affected by the hot weather will narrow down compared to yesterday.

The highest temperature for today is predicted to oscillate between 33 and 35 degrees Celsius, with some places experiencing temperature over 35 degrees Celsius. Convective clouds are likely to develop gradually, causing thunderstorms at approximately one third of the affected area, while local areas will have moderate to heavy rain in certain areas.