Home / News
Investment capital for transport projects in HCMC estimated over VND27, 000 bil
ChandraGarran04 1-05-2021, 14:40
The Department of Transport of HCMC has proposed the municipal People’s Committee to allocate a capital of VND27, 488 billion (US$1.19 billion) to project construction of main roads connecting border gates and ports in the city. 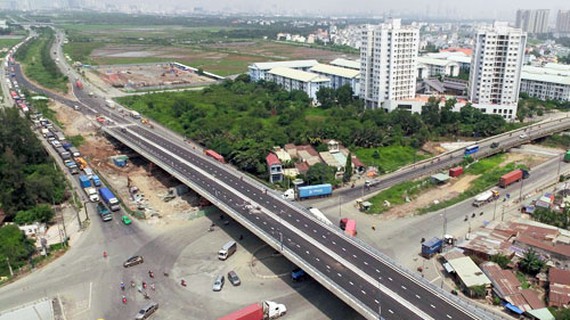 HCMC has currently six transport projects linking border gates and ports that are expected to reduce traffic congestion.
Among these projects is the construction of an interchange at My Thuy Roundabout whose first phase has been finished. The remaining works have been implemented. Other two proposed projects are the sections 1 and 2 of the Ring Road 2 that were approved by the City People’s Committee in Thu Duc City. These sections will connect ring roads in eastern HCMC with Pham Van Dong Street and 1A National Road. The remaining constructions are new proposed projects, including the North - South road (section from Nguyen Van Linh Road – Ba Chiem Bridge), with total investment of VND7, 013 billion (US$304 million); the eastern route from Phu My bridge to My Thuy intersection in Thu Duc City at a total capital of VND1,219 billion (US$52.8 million); the eastern ring road from My Thuy intersection to Nguyen Duy Trinh - Ring Road 2 intersection in Thu Duc City, costing more than VND1.018 billion (US$44.14 million).