On the occasion of the Chol Chnam Thmay festival, a delegation of the Union of Friendship Organizations of Can Tho City and the city's Vietnam - Cambodia Friendship Association came to Consulate General of the Kingdom of Cambodia to Ho Chi Minh City to extends their best wishes. 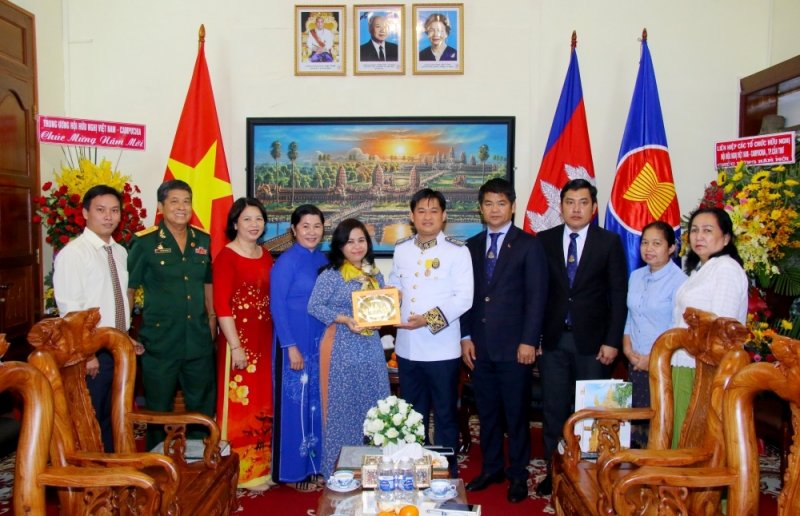 At the event. Photo: VNT

The New Year festival, called Chol Chnam Thmay in Cambodia, Songkran in Thailand, Bunpimay in Laos and Thingyan in Myanmar, takes place in April every year, attracting tourists with traditional culture, a festive atmosphere and water splashing traditions to wash away bad luck and pray for a good new year.

Chol Chnam Thmay is one of the most important festivals for Khmer people in Cambodia. It usually lasts three days and is celebrated mostly in pagodas.

On the occasion of the Chol Chnam Thmay traditional Tet holiday of the Kingdom of Cambodia, on the afternoon of April 8, the delegation of the Union of Friendship Organizations of Can Tho City led by its President Le Thi Thanh Giang and the city's Vietnam - Cambodia Friendship Association came to extended their New Year wishes to the Consulate General of Cambodia.

At the meeting, Giang shared information about the traditional friendship between Can Tho City and the Kingdom of Cambodia. President of the Union of Can Tho wished to tighten the exchange, solidarity and friendship activities between the Union of Friendship Organizations; Vietnam - Cambodia Friendship Association in Can Tho City with the Consulate General and Cambodian partners. Especially, the exchange activities between students and young people contributes to help the young generation understand and tighten the solidarity, traditional friendship and good neighbors of the two countries.

Sok Dareth - Consul General of the Kingdom of Cambodia in Ho Chi Minh City thanked the good wishes of the Union of Friendship Organizations and Vietnam - Cambodia Friendship Association of Can Tho City.

As Consul General of Cambodia, Sok Dareth affirmed that he would be an effective bridge in further strengthening the comprehensive cooperation between the two countries in general and between Can Tho city and Cambodia's brother province in particular.

On this occasion, the Can Tho Union of Friendship Organizations handed over 5,000 medical masks to the Consulate General of Cambodia in Ho Chi Minh City to support the Cambodian people to fight against the COVID-19 epidemic.

On late April 6, the Cambodian PM issued a decision on temporarily banning movement between provinces from April 7 to 20 to prevent the spread of COVID-19.

In the afternoon of April 9, the country’s health ministry announced 576 new cases of COVID-19, with 90 live in Phnom Penh. The national count reached 3,604./.