Some projects submitted at the national science and technology for high school students have surprised people as they have dealt with complicated issues such as treatment of cancer and stroke. 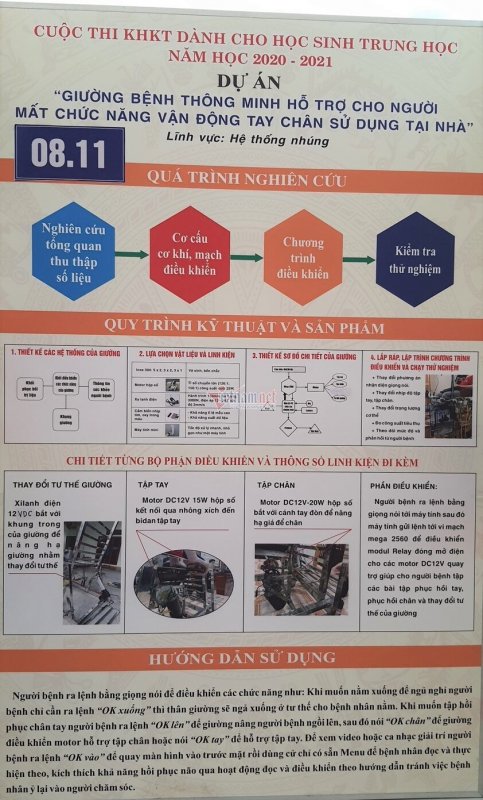 H.T. M, headmaster at a high school in HCM City, said his school has not participated in the competition in recent years, and that it is too costly to let teachers help students implement the works, as is the custom.

To be eligible to enter the national competition, the works need to be shortlisted from competitions at school and province/city levels. Many schools, students and parents, eager for achievements, spend big money and efforts on the competitions.

As the Ministry of Education and Training (MOET) stipulates that students winning prizes at the national competitions can enroll in university without attending entrance exams, everyone strives for the prizes.

“The competition is a useful playing field for high school students, but its significance has been ‘distorted’. The works entering the competition bear students’ names, but in fact there are big teams of supporters behind the students,” T said.

“The competition turns out to be a race among students, teachers and schools,” he said.

He wondered whether the competition would even exist if the exam exemption incentive was removed.

Students not to blame

Pham Thai Son from the HCMC Food Industry University affirmed that it is a good idea to organize such a competition to encourage students to apply their academic knowledge in practice.

The crucial problem is finding out if the works are really implemented by students themselves.

It is often surprising to many people that high school students are dealing with complex topics, including treating serious diseases such as cancer.

According to Son, the students are innocent and this should be blamed on teachers, headmasters and parents.

Do Van Dung, rector at the HCMC University of Technology and Education, said that some parents have asked for help from experts to prepare works for the competition, with the aim of winning high prizes.

Some schools have hired university lecturers to prepare the works, while students just needed to learn the presentations by heart and be present at the competition.

An analyst noted that the projects on cancer treatment are just "copies". These are complex topics that can be implemented only by experts and at modern laboratories.

Despite the problems, Dung still supports the idea of organizing the competition, saying it is an incubator for research works in the future and ineligible works should be disqualified so as to encourage students’ creativity.