HCM City Department of Natural Resources and Environment has approved a plan to restrict groundwater exploitation in 2021. 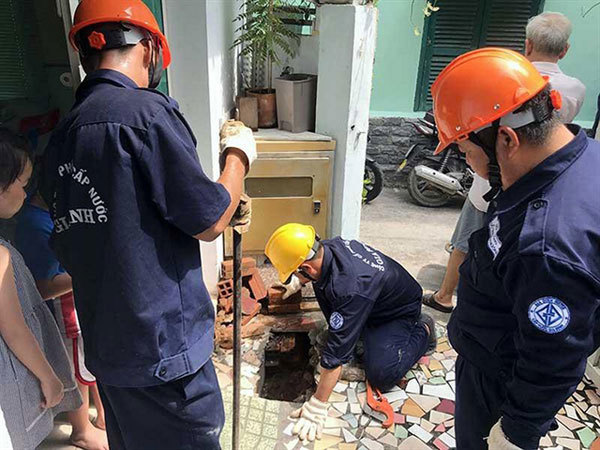 Filling up a bored well in HCM City’s Go Vap District. The city has about 100,000 bored wells, exploiting about 700,000 cu.m of groundwater a day. — Photo monre.gov.vn

To achieve the goal, the department will stop licensing 74 groundwater exploitation works that belong to companies, industrial parks and export processing zones, and will encourage households to fill up wells in areas where clean tap water is accessible. Costs for filling up wells will be covered by the city’s water sector.

Huynh Thanh Nha, head of the department’s Water Resources, Mineral Resources, Sea and Island Division, said the city has about 100,000 bored wells that exploit about 700,000cu.m of groundwater a day.

Many households that have access to tap water still keep their wells as backups in case the tap water source is unstable. Many companies also use wells to save on water costs.

The city has an average subsidence rate of 4cm a year, according to the Ministry of Natural Resources and Environment. Land subsidence of 5-10mm has occurred in Binh Chanh, Binh Tan, Thu Duc and Nha Be districts and districts 2, 7, 8 and 12.

Phan Huu Thanh, who lives in Binh Tan District, said his family stopped using a bored well and switched to tap water after local authorities explained that overexploitation of groundwater was contributing to subsidence.

Groundwater can also be harmful to health because of dangerous chemicals or wastewater.

A Preventive Health Centre investigation found that water samples from wells showed concentration levels of iron, pH, E.coli bacteria and ammonia that failed to meet standards set by the Ministry of Health.

To protect residents’ health, city authorities said that clean, safe water would continue to be supplied to all city households in every district.

By 2025, the municipal water supply capacity is expected to reach 3.6 million cu.m per day, using only 100,000cu.m of groundwater.

Last year, the city saw a fall of 113,500cu.m per day in groundwater exploitation, exceeding 3.16 per cent of its plan, Tran Van Thach, deputy director of the department, said.