Many new investors have made high profits after the stock market reached a record high. 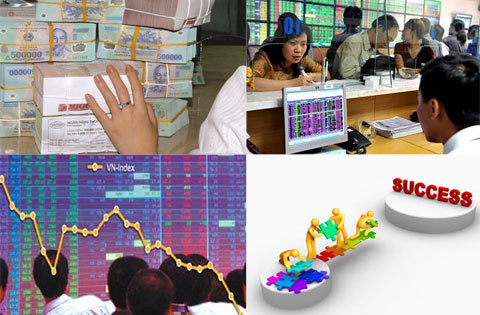 More than VND22 trillion, or nearly $1 billion worth of stocks, were traded in that session.

The VN Index has been recognized as one of the sharpest increasing indexes in Asia.

Some financial experts are worried about the sharp increases, while some experienced investors have begun selling stocks as they can "feel the danger". However, many veteran investors still believe that stock prices will increase further.

The stock prices are increasing, but liquidity hasn't risen dramatically. The trading value is still about $1 billion each session.

The brokerage director of a securities company commented that F0 investors’ cash is still flowing into the market and they have high confidence in the market. Hundreds of thousand of new accounts remain hot.

Analysts say that new investors are powerful. It is estimated that 90 percent of accounts are personal accounts and individual investors are believed to be driving the stock market.

The stock market faced pressure in March because of three problems.

First, a "traffic jam" occurred at the HCM City Stock Exchange (HOSE) which began in late December 2020. Many investors complained they could not make transactions in afternoon sessions because there were too many orders and the capability of the system was low.

The second problem was the pressure from foreign investors’ sales, while the third was the strong rise of speculation stocks.

However, according to Huynh Minh Tuan from Mirae Asset Securities Company, two of the three problems have been settled. The foreign investors’ net sales have stopped and cash has escaped from speculation stocks.

On April 1, 2021, foreign investors returned and made a net purchase of VND45 billion on HOSE after making a net sale of billions of dollars over the last year (by the end of March).

In the first quarter alone, foreign investors’ net sales reached VND14 trillion. Foreign investors are betting on a quick recovery thanks to big bailouts launched by the US and Japan.

Though purchasing power in the first trading sessions of April was not high, it helped restore investors’ confidence after sessions of net sales. Foreign investors mostly poured money into bluechips.

In the first quarter alone, foreign investors’ net sales reached VND14 trillion. Foreign investors are betting on a quick recovery thanks to big bailouts launched by the US and Japan.

They said the market will be more active thanks to positive information in the shareholders’ meeting season and good news about business performance in the first quarter.

Some reports predict that listed companies will see positive growth rates this year, and the EPS (earnings per share) may increase by over 20 percent.

If considering P/E (Price/Earnings ratio), Vietnam’s stocks still have an attractive valuation compared with other regional countries. Some foreign funds have even predicted that the VN Index may reach the 1,500 point peak this year.

The Vietnamese stock market expects a bright future thanks to the optimistic prospects for the global economy.

The US stock market reached a new peak after US President Joe Biden announced a spending plan focused on infrastructure. The S&P 500 Index has for the first time in history exceeded the 4,000 point threshold.

According to MBS Securities, high expectations are on shares of banks, securities, infrastructure development and building materials companies.

In addition, the serious measures taken to settle the order congestion at HOSE have helped.

Meanwhile, some analysts are cautious about predicting market performance. They think Vietnam’s economy will not make a breakthrough because of the lack of stimulus packages.

HOSE reported that the Vietnam’s stock market capitalisation value on the bourse reached VND4.46 quadrillion as of March 31, a 93.56 percent year-on-year increase.