Home / News
Vietnam voices concern over Myanmar’s escalating violence
hanguyen0409 2-04-2021, 07:15
Ambassador Dang Dinh Quy, head of the Vietnamese Mission to the UN, has voiced concern over the escalation of violence in Myanmar, which has killed hundreds of civilians, while attending a virtual conference of the UN Security Council on April 1. 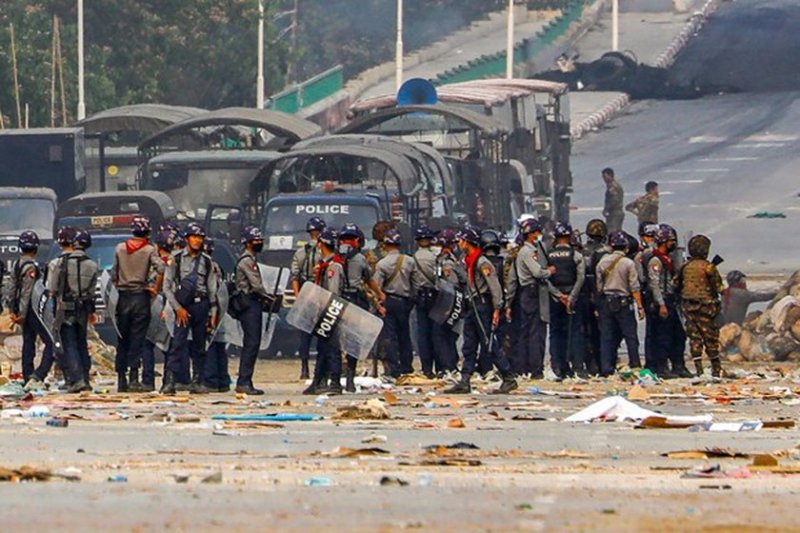 Security is tightened in Hlaingthaya district, Yangon city. (Photo: AFP/VNA) The diplomat stressed dialogue, reconciliation, cooperation and trust building in seeking solutions to the Myanmar situation.
He called on parties to end violence against civilians, while saying that priority should be given to ensuring security and safety for local residents as well as smooth humanitarian support for the needy, particularly the vulnerable groups. He said the international community should continue support for Myanmar so that the nation can stabilise domestic situation, and avoid actions that can increase divisions within Myanmar. ASEAN is making efforts to seek measures to help Myanmar, Quy said, calling on countries to support ASEAN’s work. Quy added that he backed the role of Christine Schraner Burgener, UN Special Envoy of the Secretary-General on Myanmar, and encouraged her to enhance coordination with ASEAN in the issue. At the conference, 15 UNSC member states also expressed their concern over the Myanmar situation. They condemned the use of violence, and asked relevant parties to restrain and hold dialogues to settle the issue. They spoke highly of the ASEAN’s role and hoped the grouping, in its upcoming meetings, will help Myanmar seek suitable measures. They also said they support the UN Special Envoy of the Secretary-General on Myanmar in efforts to maintain dialogue with parties involved in this Southeast Asian country as well as during trips to the region in the near future.
RELATED NEWS
TAG:
Other news