Hanoi police have busted a drug trafficking ring that was being run out of a hospital. 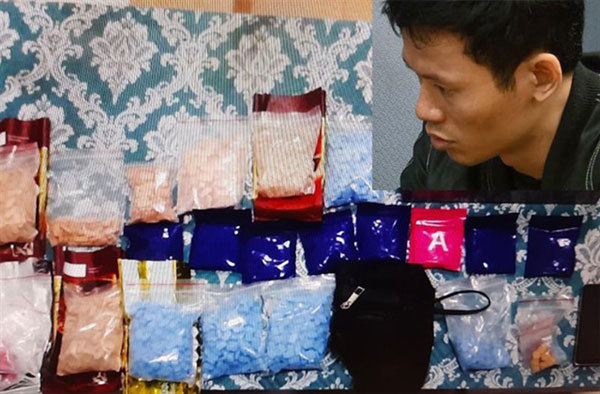 Nguyen Xuan Quy, 38, the leader of the drug trafficking ring at the National Psychiatic Hospital No 1 where the man was receiving treatment. Photo courtesy of Hanoi Police

According to police, a mentally ill man ran the ring from National Psychiatric Hospital No 1.

The ringleader has been identified as Nguyen Xuan Quy, 38, who resides in Hanoi’s Thanh Tri District.

Police investigations stated that Quy was sent to the hospital for treatment in November 2018.

He repeatedly left the hospital during treatment. In January this year, Quy was arrested by the police of Hai Ba Trung District on charges of illegally possessing drugs but was returned to the hospital due to his mental illness.

The investigation revealed that after a long time at the hospital, he formed close relationships with a number of hospital staff and was free to come and go as he pleased.

Quy renovated a treatment room into a soundproof room and installed large speakers and laser lights to use as a place to take and sell drugs.

As well as Quy and his friends, some hospital staff were also offered drugs in the room.

He sold drugs at the hospital by telling his customers to pretend to be caregivers.

To avoid being detected, Quy hired Nguyen Trung Nguyen and Nguyen Cong Thuong to disguise themselves as delivery drivers and stand at the hospital gate as lookouts. They also delivered drugs to customers.

On March 20, the Police Department for Investigation of Drug-related Crimes raided the hospital room, arresting Quy and five accomplices, including the two lookouts.

The police seized more than 6kg of drugs of various kinds, including ecstasy, methamphetamine and ketamine.

The investigation agency also arrested Nguyen Anh Vu, a technician from the rehabilitation and traditional medicine at the hospital, to investigate him for not denouncing the crime. Vu was found to be positive for drugs after a quick test.

All the suspects reportedly admitted their crimes.

The investigation is ongoing.

In related news, the Ministry of Health has requested the National Psychiatric Hospital No1 to work with law enforcement regarding the incident.