Vietnamese ambasador to China Pham Sao Mai reviews the popsitive development of the Vietnam - China relations over the past 71 years.

Present at the ceremony were Assistant to the Chinese Foreign Minister Wu Jianghao and representatives of various Chinese ministries and agencies, as well as Chinese business executives.

Addressing the function, Ambassador Pham Sao Mai highlighted major milestones in the Vietnam-China relations during the past seven decades, as well as the fruitful cooperation between the two countries in recent times.

Despite the COVID-19 impact, Mai said both countries’ leaders have maintained high-level exchanges in various flexible forms to tighten bilateral relations and increase cooperation, especially in economics, trade and investment.

He cited China Customs data, saying Vietnam remains the largest trading partner of China among ASEAN countries, with two-way trade turnover in 2020 reaching US$192.2 billion, up 18.7% from the previous year. China is the third largest FDI investor in Vietnam.

According to the diplomat, Vietnamese Party General Secretary and State President Nguyen Phu Trong and his Chinese counterpart Xi Jinping made an important phone call on February 8, outlining major orientations for the Vietnam - China comprehensive strategic partnership in the coming time. 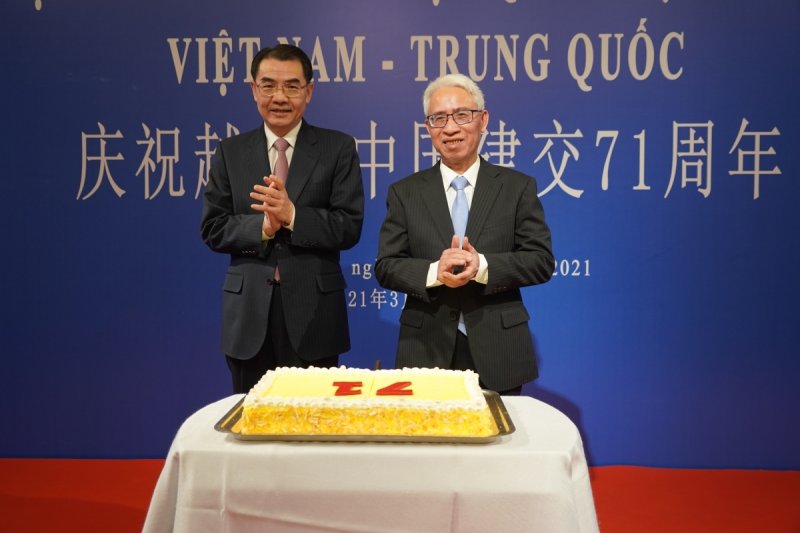 In this spirit, Ambassador Mai suggested that the two sides should fully and effectively implement the high-level common consensus, by enhancing political trust, expanding and improving the efficiency of cooperation in all fields, promoting people-to-people exchange, while controlling and satisfactorily handling disagreements on the basis of respecting each other’s legitimate interests in accordance with international law, especially the 1982 United Nations Convention on the Law of the Sea (UNCLOS).

The overall goal is to develop the Vietnam - China comprehensive strategic cooperation partnership in a healthy, stable and substantial manner, contributing to maintaining peace, stability, cooperation and development in the region and the world at large, said the ambassador.