Leaders of many countries in the world have extended their congratulations to Party General Secretary and State President Nguyen Phu Trong over his re-election as General Secretary of the Central Committee of the Communist Party of Vietnam in the 13th tenure. 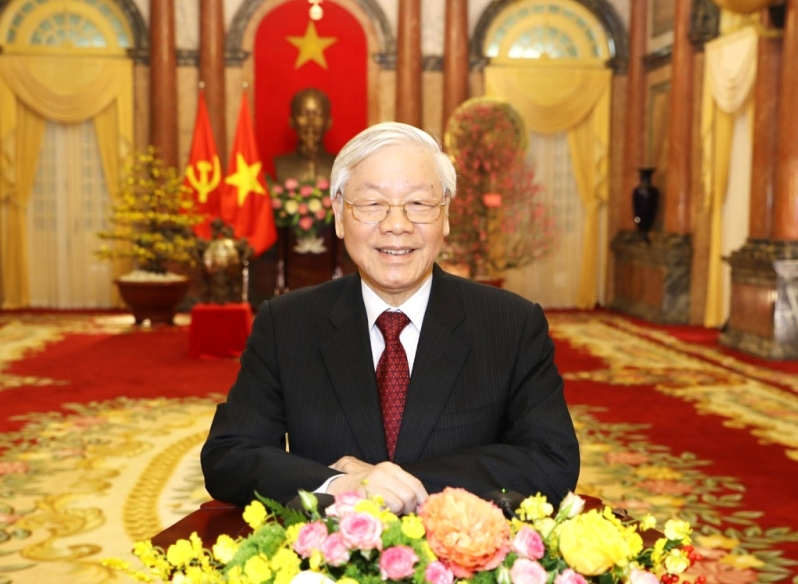 In his message, Russian President Vladimir Putin said Russia values the personal contribution of the Vietnamese Party leader to strengthening the comprehensive strategic partnership between the two countries.

He expressed a belief that with joint efforts, the two countries will continue to promote bilateral constructive dialogues and effective cooperation in all fields, which meets the interest of the people of both Russia and Vietnam and contributes to ensuring stability and security in the Asia-Pacific region.

Meanwhile, US President Joe Biden appreciated the commitments made by General Secretary Trong to promoting the US-Vietnam partnership, and expressed his wish to further bolster the bilateral ties.

He also welcomed the Vietnamese Party leader’s efforts in fighting corruption and promoting good governance, and wished the Party General Secretary success in his position.

The US President stressed that cooperation among the US, Vietnam and the ASEAN is very important to promoting shared priorities in the context of grave challenges facing the international community.

The message from Indian President Ram Nath Kovind noted that under General Secretary Trong’s leadership, the special and time-tested relations between India and Vietnam have witnessed unprecedented development in the past decade with the elevation of bilateral ties to a comprehensive strategic partnership in 2016.

He said he wishes to continue working with the Vietnamese leader to further promote the relationship between the two states and two peoples, saying that the close coordination and partnership between the two countries in the post-pandemic world will contribute to peace and prosperity in the region and the world.

Meanwhile, Japanese Prime Minister Suga Yoshihide said he was honoured to meet and talk with General Secretary Trong during his visit to Vietnam, his first trip abroad after taking office as the PM of Japan. He expressed a hope that he and the Vietnamese Party leader will continue to coordinate in the time ahead to further develop and deepen the extensive strategic partnership of the two countries across the fields from politics and security to economics and trade.

As the world is facing unprecedented threats posed by the COVID-19 pandemic, Japan wishes to stand side by side with the international community, including Vietnam, to overcome difficulties and challenges, Suga wrote, noting his hope that the Japan-Vietnam cooperative relationship will continue to be strengthened even during the pandemic.

President of the Republic of Korea (ROK) Moon Jae-in praised the efforts of the Vietnamese Party leader to develop the ROK-Vietnam ties over the past time. He said he hopes to continue working with General Secretary Trong for the development of the two countries’ strategic cooperative partnership in the time ahead.

In his message, French President Emmanuel Macron noted that the two countries have made joint efforts to enhance their friendship and cooperation for many years. He highlighted the visit by General Secretary Trong to France in March 2018 as a strong boost to bilateral ties. The President affirmed that France wants to work together with Vietnam to overcome great global challenges, especially the COVID-19 pandemic, climate change and preservation of biological diversity.

Macron hoped that the two sides will join hand to further deepen bilateral ties in economics, culture, health care and national defence. He reiterated France’s strong commitment to ASEAN and close cooperation in multilateral institutions such as the UN Security Council on the basis of international law.

Singaporean Prime Minister Lee Hsien Loong wrote in his message that under the leadership of General Secretary Trong, Vietnam has made strong leaps in the past decade. He stressed that the 13th National Congress of the Communist Party of Vietnam marked the start of a new key period in Vietnam’s socio-economic development.

Singapore and Vietnam are both traditional friends and strategic partners, and have always cooperated closely and effectively in both bilateral and ASEAN frameworks, he said, affirming his belief that the close bilateral relations will continue to be promoted in the years to come.

Meanwhile, Thai Prime Minister Prayut Chan-ocha wrote in his message that the outcomes of the Congress demonstrated the trust of the Vietnamese Party and people in Party General Secretary Trong.

“I believe that under your sound leadership, Vietnam will continue to develop more strongly,” he said, and re-affirmed Thailand’s firm commitment to further deepening the enhanced strategic partnership with Vietnam.

The Thai PM expressed his wish that the two countries will cooperate more closely for the interest of their people and for peace and development in the region.