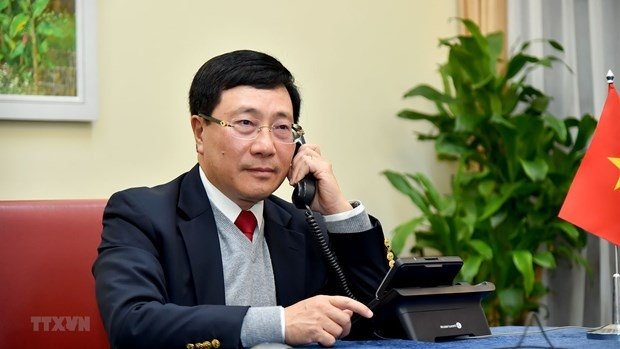 NDO/VNA – Deputy Prime Minister and Foreign Minister Pham Binh Minh had talks over the phone with US Secretary of State Antony Blinken on February 5.

Congratulating Blinken on his appointment as US Secretary of State, Deputy PM Minh expressed his readiness to cooperate closely with Blinken to further promote the Vietnam - US comprehensive partnership for the sake of the two peoples, thereby contributing to peace, security, development, and prosperity in the Asia - Pacific region and the world as a whole.

Sharing the view that the two countries’ relations have enjoyed strides in all aspects over the last 25 years, the officials agreed to work together to develop bilateral ties more comprehensively and intensively in the time ahead, with focus on economy - trade - investment, settlement of war consequences, improvement of maritime capacity, science - technology, education - training, COVID-19 prevention and control, and climate change response.

The US Secretary of State offered congratulations on the success of the 13th National Congress of the Communist Party of Vietnam, affirming his country’s continued attachment of importance to relations with the Southeast Asian nation.

He also congratulated Vietnam on its successful performance in the 2020 ASEAN Chairmanship and the first half of its two-year term as a non-permanent member of the UN Security Council.

The US respects and supports ASEAN’s centrality in the region and wishes stronger cooperation between the two sides in regional and international mechanisms on issues of common concern, Blinken added.