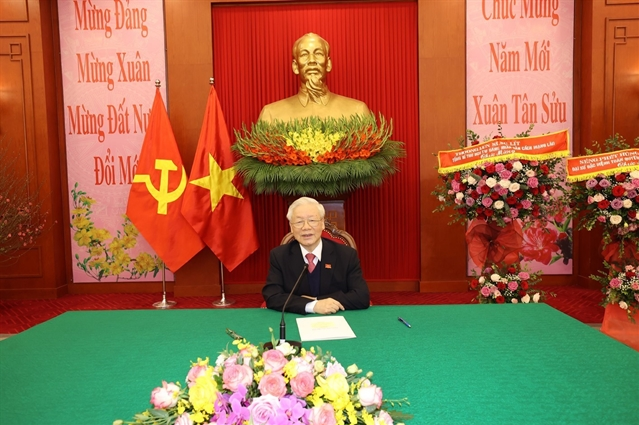 The Vietnamese Party and State leader thanked the Lao People’s Revolutionary Party (LPRP) Central Committee, ministries, agencies, the Lao Front for National Construction and political organisations of Laos for sending letters of congratulations to Vietnam on the success of the 13th National Party Congress, vividly reflecting Vietnam – Laos special solidarity, according to the VNA.

Informing the Lao leader about outstanding results of the 13th National Party Congress, Trong affirmed that the Congress has been a success, marking an important milestone in the development of the Party and country.

He also congratulated Laos' achievements in recent times, and expressed his belief that under the sound leadership of the LPRP led by Thongloun Sisoulith, the Lao people will continue reaping greater successes in the cause of national defence and construction, as well as successfully realising the Resolution adopted at its 11th National Party Congress.

Vietnam strongly and fully supports the cause of national renewal, defence and construction in Laos, he affirmed.

Speaking highly of Party chief Trong’s role and contributions to Vietnam's national construction and defence and Laos – Vietnam special solidarity, Thongloun Sisoulith believed that under the leadership of the Communist Party of Vietnam (CPV) headed by Trong, the Vietnamese people will continue gaining greater achievements in the national construction and defence, building a strong and prosperous country by the mid-21st century.

He expressed his profound thanks to the Vietnamese Party, State and people for providing valuable and effective support for the Lao counterparts.

The two leaders stressed that as 2021 is the first year to carry out Resolutions adopted at their Party congresses, both countries should stay determined to overcome challenges and effectively realise the agreements set by the two Parties and countries’ leaders.

They affirmed that under any circumstance, the two sides will do their best to foster and hand down Vietnam - Laos special solidarity to next generations.

The Vietnamese and Lao leaders invited each other to their countries at convenient time. 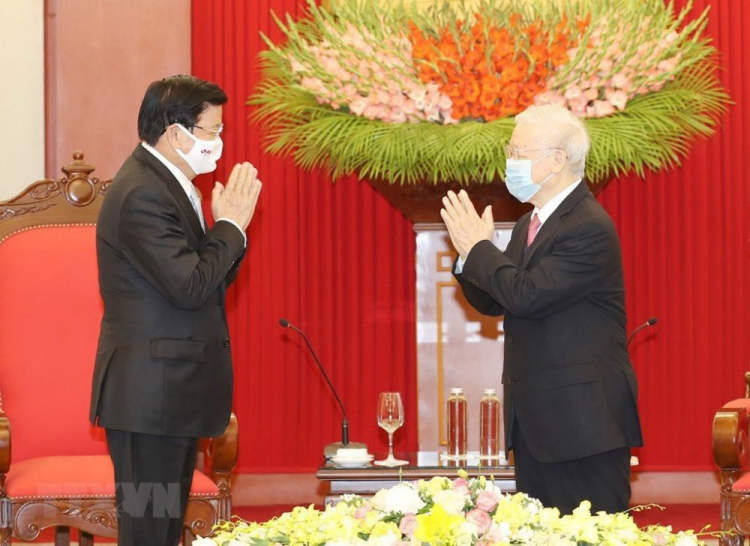 In January, Secretary General of the Communist Party of Vietnam (CPV) and State President Nguyen Phu Trong has invited General Secretary of the Lao People’s Revolutionary Party (LPRP) Central Committee Thongloun Sisoulith to visit Vietnam shortly after the Lao counterpart was elected to the post.

During the talks, Mr. Trong affirmed Vietnam’s strong and comprehensive support for Laos’ national building and safeguarding as well as the renewal cause.

The two leaders said keeping the great friendship, special solidarity, and comprehensive cooperation between the two countries is a strategic mission.