Since the beginning of 2021, many construction projects for traffic facilities in the South of Vietnam have been kicked off to partially address transport issues in the region for a more sustainable economic growth. In an interview with SGGP Newspaper, Minister of Transport Nguyen Van The briefed the focus of these critical projects. 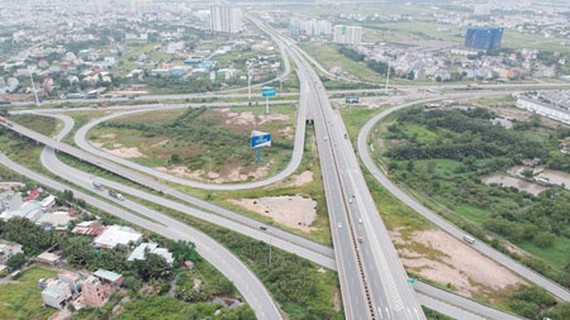 Commenting on the overall picture of traffic in the South of Vietnam, Minister Nguyen Van The said that there have been welcoming improvements after the introduction of major bridges of Cao Lanh, Vam Cong, and Rach Mieu, along with the opening of Lo Te – Rach Soi Route on national ways. Another important construction to be formally in operation this year is Trung Luong – My Thuan Expressway.

He admitted that the weakness at the moment is not a lack of investment but the loose connection between areas, leading to ineffective exploitation. For example, Cai Mep – Thi Vai International Port is the best in Vietnam, with a capacity of 230,000 tonnes, but is only using half of that because of insufficient supporting traffic facilities and frequent congestions in the neighborhood.

Therefore, in the medium-term investment plan from 2021-2025 to be submitted to the Prime Minister, the Ministry of Transport (MoT) will focus more on upgrading national ways, especially those with a high congestion or accident rate. More investment ill be poured into specific routes for high-speed trucks, for connections between urban areas, sea ports, economic zones, and border gates.

He listed a series of routes to be formed in the 340-km construction project, namely Bien Hoa – Vung Tau, Can Tho – Ca Mau, Chon Thanh – Duc Hoa, My An – Cao Lanh, An Huu – Cao Lanh.

Water traffic is the advantage of the South, yet it is now not at its full capacity. Minister The shared that in the next 5 years, his ministry will begin the second stage of several essential projects to upgrade the river routes of Cho Gao, Hau River, while starting work on the Southern logistics project and increasing the vertical clearance of major bridges.

He then cited the success of Binh Loi Bridge as an example. The vertical clearance increase on this bridge has made water traffic much more convenient for businesses that need to transport goods from the provinces of Binh Phuoc, Binh Duong, Dong Nai to ports located in Ho Chi Minh City.

The Minister introduced the construction project of Tran De Deepwater Port in the Mekong Delta to welcome 80,000-tonne ships.

When being asked about the necessary capital for upgrading traffic infrastructure in the South of Vietnam, Minister The first mentioned the mobilization of resources in the community. To do that, his ministry is now preparing necessary legal regulations to attract more capital using the Public-Private Partnership model (PPP), where the State will investment no more than 50 percent of the total cost.

Due to the land characteristic of the Mekong Delta, the investment amount is supposed to be higher, so MoT proposes to have a more flexible regulation on the investment percentage between public and private partners so that potential projects can be launched as soon as possible.

The Minister added that any projects without capital return ability should be under the responsibility of the Government to ensure social welfare and fair development among regions.

Another promising action is the establishment of large corporations for the ease of accessing capital and enjoying incentive policies to serve water traffic construction projects. MoT is now preparing necessary documents on regulations for the approval from the Government.

Minister The expressed his belief that the close cooperation between the State, the local authorities, and the public will create an impressive change in the overall picture of traffic in the South of Vietnam in the next 20 years, contributing to the sustainable socio-economic development of the Mekong Delta.

Today, 02:23
Arasan refreshes its Total USB IP Solution with its next generation of USB 2.0 PHY IP