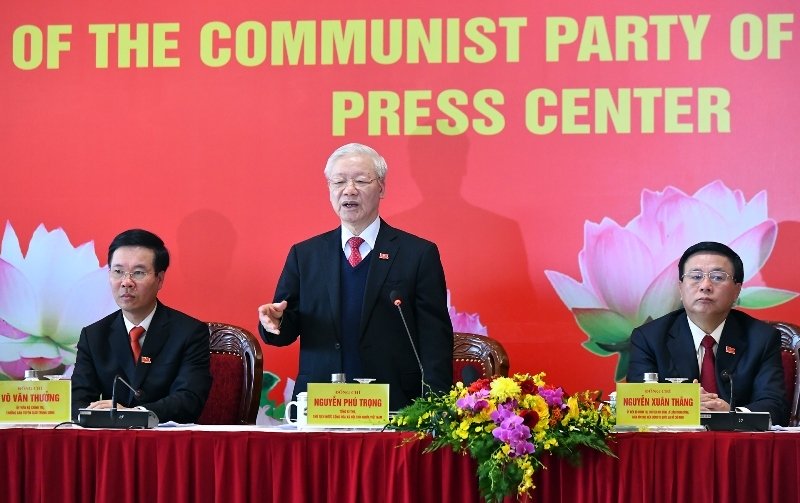 The congress was successful in many aspects, from its content, form, organisation, to working attitude, resulting in the adoption of its resolution, he said.

The leader highlighted the efficiency of preparation work, especially regarding documents and personnel for the congress.

The drafting of a great deal of documents began in 2018, with 80 revisions and the gathering of ideas from all sectors and agencies, and for the first time the draft documents were made public for discussion among people from all walks of life.

Meanwhile, personnel preparations were conducted in a careful, objective, and fair manner via different steps. Preparations for personnel work in connection with the Party Central Committee and other leadership agencies were made with opinions contributed by different agencies, thus receiving high consensus at the congress, he said.

Voting took place smoothly, he went on. The first meeting of the 13th Party Central Committee, which was scheduled for the whole day, concluded in only half of a day.

The organisation of the congress was very meticulous. Along with providing the best conditions for delegates, the security and safety of the congress were also protected despite a new outbreak of COVID-19 in the country.

Party General Secretary and State President Nguyen Phu Trong stressed that the important thing now is how to bring the resolution to life.

The resolution must be institutionalised and specified in drastic policies and directions from the high to grassroot levels, helping people become wealthier and improve their living conditions. Only then it will be a genuine success, he said.

The leader thanked Vietnamese and foreign media for covering the gathering, underlining their contributions to the congress’s success.

He expressed a belief that following the congress, the media will continue spreading the aspirations from the congress among the entire Party, armed forces and people, creating strength and taking a step forward in national development, bringing Vietnam to the same level as other countries around the world.

“Never before has our nation had the fortune, strength, position, and prestige it has today,” the top leader emphasised. “This has been stated in the congress’s documents. We are proud of this and we will continue to work to promote it.”

The Party General Secretary and other leaders of the Party and State answered questions from domestic and international reporters at the press briefing on the contents, results, and success of the 13th National Party Congress.