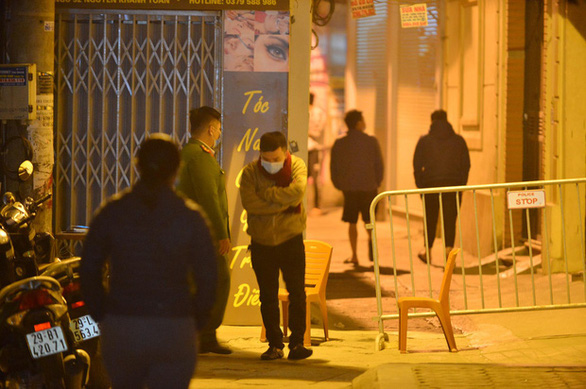 Authorities in Cau Giay District, Hanoi have cordoned off and fumigated a small alley on Nguyen Khanh Toan Street after a new case of COVID-19 infection was identified in the neighborhood.

As per an earlier report from the Hanoi Department of Health, L.A.T., a 20-year-old from the northern province of Hai Duong, who currently lives in a dorm on Nguyen Khanh Toan, tested positive for COVID-19 on Thursday at Bach Mai Hospital after experiencing a cough, fever, and sore throat a day before.

T. is currently in isolation and being treated at the National Hospital for Tropical Diseases in the capital.

He is also the first case of COVID-19 transmission recorded in Hanoi since the last emergence there back in August 2020.

Upon being notified of T.’s case, authorities immediately conducted epidemiological investigation, during which they identified close contacts of the infected and obtained their samples for testing.

“The residential area was blocked off during the night," Dung said.

“Officials have detected more than 30 residents in the locale who came into close contact with T.

"The neighborhood will be sealed off completely until the outbreak under control.”

An epidemiological investigation revealed that T. is the direct source of transmission for a number of COVD-19 cases in Hai Phong, a coastal city 120km east of Hanoi, according to Truong Quang Viet, deputy director of the Hanoi Center for Disease Control.

Vietnam has documented 1,651 coronavirus patients as of Friday morning, with 1,430 recoveries and 35 virus-related deaths, according to the Ministry of Health.

A cluster of at least 73 COVID-19 infections was detected in Hai Duong Province on Thursday morning.

Social distancing was reinstated in the province from noon the same day.

The country had spent nearly two months detecting no local transmission before the new clusters were uncovered.