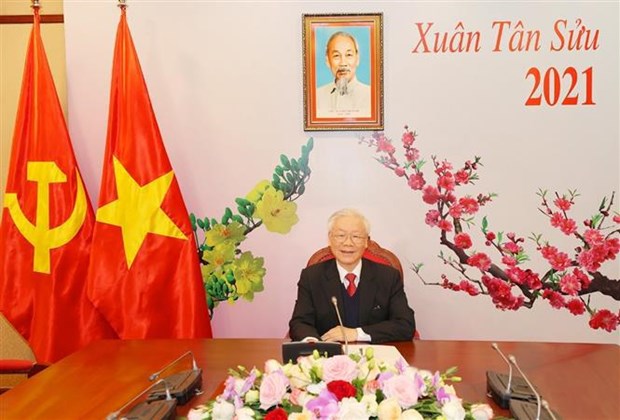 During the talks, Trong congratulated the LPRP on the successful organization of the 11th National Congress and Sisoulith on his election to the Party General Secretary post.

He expressed his hope that under the leadership of the LPRP and General Secretary Sisoulith, Lao people will gain greater achievements in the national building and defence and renewal cause.

Sisoulith, in turn, thanked Vietnamese leaders for sending congratulatory messages to the LPRP and him, and briefed Trong on the outcomes of the just-ended 11th National Party Congress of Laos.

He also showed his belief that under the leadership of the Communist Party of Vietnam, the country will reap more fruits and successfully organize the upcoming 13th National Party Congress.

The Vietnamese leader spoke highly of the outcomes of Laos’ 11th Congress, stressing that this is an important milestone in the country’s development process and a great encouragement for Vietnam during its preparation and organization of the 13th National Party Congress.

He affirmed Vietnam’s strong and comprehensive support for Laos’ national building and safeguarding and renewal cause.

Both leaders showed their delight at the constant development of the Vietnam-Laos special solidarity, which has benefited the two countries’ people.

Continuously consolidating and developing the great friendship, special solidarity and comprehensive cooperation between the two countries is a strategic mission crucial to the protection of national independence, sovereignty and territorial integrity and socialism building in each country, thus contributing to peace, stability, cooperation and development in the region and the world, they emphasized.

They also vowed to do their utmost to protect and foster the special relations in any circumstances.

Both leaders invited each other to visit their respective countries at an appropriate time.